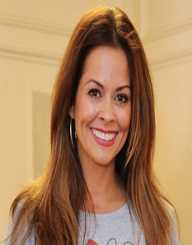 A versatile American actress and television personality, Brooke Burke was born on September 8, 1971, in Hartford, Connecticut, United States. She is a successful entrepreneur and runs a website ModernMom.com. She has been known as a trusted resource in the arena of motherhood and social media networking which motivates her in co-creating the website with, Lisa Rosenblatt.

Brooke Burke was the third child born to Donna and George Burke. Her mother was of Portuguese background but was raised Jewish, and her father was of Irish and French background. Owing to her multi-ethnic ancestry, she was blessed with exotic looks. Her parents separated when she was two years old; she moved to Tucson, Arizona with her mother. Her mother met and fell in love with Armen Hartounian and decided to marry; she worked and took care of the finances, and Armen took care of the kids and raised them Jewish.

Brooke Burke got her formal education from Sahuaro High School and Palo Verde High School. She always dreamt of becoming a rock band drummer, but her good looks and sculpted body made her win a beauty pageant at the age of 14 and later pulled her into the entertainment industry, where she is holding her position till date. She studied broadcast journalism at the University of California, Los Angeles (UCLA). By the age of 18, she became a busy model, shooting ad films, swimsuit calendars, and billboards.

Brooke Burke was put into the limelight at the age of 14 for winning a beauty pageant thanks to her spectacular body structure and beautiful features. She was a contestant at the American dance competition: Dancing with the Stars and later co-hosted the show. She has made a tremendous growth as a person throughout these years.

Her entrepreneurial venture commenced in 2007 with the company Baboosh Baby, which offers wraps for pregnant women called Tauts. It helps new mothers to get back into shape and flaunt their body like never before. The website also features a blog where Burke talks about her children and how she manages everything. Brooke Burke then started the second venture, ModernMom.com, where she provides in-depth knowledge to pregnancy, other tips and tricks to prevent stretch marks and what not. She also points towards creative ways of living healthy, ways to teach your kids mindful eating, provide you with new healthy recipes and so on.

Burke‘s first TV show was ‘Pensacola: Wings of Gold’ but her journey towards fame started from hosting of ’Wild On!’ On the E! Entertainment cable Network (1999 to 2002), where Brooke Burke got an opportunity to travel across 120 countries and got the celebrity status from there on. She played a role of a reporter in the show ‘That’s Life’ (2002), ‘The Bernie Mac Show’ (2004) and ‘Monk’ (2004). In 2004, she appeared in various other TV shows such as ‘Rock Me Baby,’ ‘Less than Perfect’ and ‘It’s All Relative.’ In 2014, she came into sight in the television show named ‘Melissa & Joey.’ She competed in the TV show host edition of ‘The Weakest Link,’ but was voted out in the second round.  Burke also hosted the CBS summer reality show ‘Rock Star’ in 2005 and 2006.

Brooke Burke modeled for several agencies which include Wilhelmina, Ford, and Cunningham-Escott-Dipene, where she appeared in various ads, swimsuit editorials, commercial catalogs, magazine covers, and posters. Later she also modeled for Coca-Cola, M Professional Cosmetics, Anheuser-Busch, and Discover Card; presently she is the spokesperson for Sketchers. Her acting career began with a special appearance in the comedy movie ‘Dodgeball – A True Underdog Story’ which followed by a role in ‘Knuckle Sandwich’ and ‘The Hazing.’

In 2009, NBC’s pre-show for 66th Annual Golden Globe Awards was hosted by Burke with Nancy O’Dell and Tiki Barber. In 2010, Brooke Burke hosted the third season of a modeling competition show: TV Land series ‘She’s Got the Look,’ which was for women over 35.  She co-hosted Miss America pageants with Chris Harrison in 2011, 2012 and 2013. She will be participating in The New Celebrity Apprentice in 2017.

Brooke Burke’s hosting talent landed her a spot at the adventurous travel show ‘Wild On!’ on E! Entertainment channel in the year 1997 and her three years contract with them made her way to stardom. She participated in season 7 of ‘Dancing with the Stars’ with a dancing professional, Derek Hough. On November 25, 2008, they won the competition beating Warren Sapp and his partner Kym Johnson. Later, she co-hosted the American dancing show: ‘Dancing with the stars’ replacing Samantha Harris, from season ten to season seventeen, along with her partner Tom Bergeron.

Brooke Burke appeared in several men’s magazines such as Stuff, FHM, Maxim, and Playboy. She was also listed as one of the Blender’s hottest women of film and television.

The mother of four lovely kids justifies her entrepreneurial venture as well, where Brooke Burke takes the lead as the President of BabooshBaby.com and Co-CEO of the website ModernMom.com.

In Electronic Arts’ video game ‘Need for Speed: Underground 2’, Brooke Burke was the voice and face of Rachel Teller; in video game ‘Trivial Pursuit Unhinged,’ she asks people and places questions. She also starred in ‘Burger King advergaming’ and ‘Big Bumpin’.  Burke fronted infomercials by promoting a Swiss ball video: Gunnar Peterson’s Core Secrets which is a home fitness workout and was screened in Australia and New Zealand. She also made an appearance in the first video of the series, ’20 Minute Full Body Workout’.

On February 1, 2011, her first book, ‘The Naked Mom: A Modern Mom’s Fearless Revelations, Savvy Advice, and Soulful Reflections’ was published. The book showcased an honest picture of motherhood to which all women would relate to. Here, she continuously insists on being your true naked self instead of pondering about right and wrong. Brooke Burke gives the insights on what exactly happens behind the scenes of surprisingly ordinary life as a celebrity mother, and how she manages and sometimes tries to manage every job to perfection. She reveals that she likes to dance through it all and this how it has to be done.

Brooke Burke has been married twice till date. She was first married to Garth Fisher, a plastic surgeon. The couple had two beautiful daughters out of their wedlock, Neriah Shae Fisher, born in March 2000, and Sierra Sky Fisher, born in April 2002, they divorced in 2005.

In 2006, she started dating a singer and actor, David Charvet. In 2007, they had a daughter, Heaven Rain, and a son Shaya Braven in 2008. Later on August 12, 2011, the couple got married, and Brooke Burke announced that she would be called Brooke Burke-Charvet from now on. On November 8, 2012, she announced that she had thyroid cancer and had to undergo surgery. Later same year on December 12, another announcement regarding recovery from the disease was made.

Brooke Burke has been a fitness freak all her life, and even after being a busy working mother of four kids, she still manages to take out an hour five times a week and never misses her meals, and that is the secret to her beautiful and well-sculpted body.