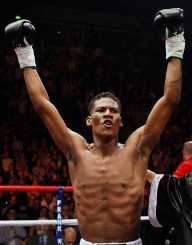 Breidis Prescott was born 3rd May 1983, in Barranquilla, Colombia.

Breidis Prescott began as an amateur boxer and represented Colombia in 2003 at the Pan American Games. He didn’t get past the first round.

He turned professional in July 2005 and burst onto the world boxing stage by winning 18 of his first 20 fights. He had a reputation for being a strong puncher, and 17 of his first 18 wins were accomplished by knockout or the game being stopped due to his opponent not being fit to continue.

In 2008, Breidis Prescott had a good year, winning his fights. As part of this, he won his first title, the WBO Inter-Continental Lightweight Title. During the next few years, though, he lost several as well as winning some. Even so, he had established himself as a world-class boxer. Out of his 41 professional fights, Breidis Prescott won 30 of them, losing 11. Nobody can argue that this is a great win-loss ratio.

Breidis Prescott has fought in three divisions throughout his career – Lightweight, Light Welterweight, and Welterweight.

Breidis Prescott has a younger brother, Daulis, who is also a professional boxer.