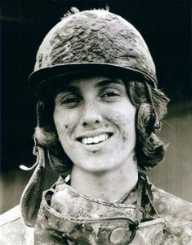 One of the earliest female professional jockeys in the US, Diane Crump was the first woman to compete in the Kentucky Derby.

Diane Crump was born in Milford, Connecticut in 1948. Her family later relocated to Oldsmar in Florida where she grew up. From a tender age, Crump was fascinated with ponies. She liked reading stories with horse pictures in them. At the age of 12 when they relocate to Florida, she bought her pony.

Their proximity to the Tampa Bay Downs horse racing track proved instrumental in her early life. As a novice rider, she would mount her pony and ride with other children at the track. When she had gained confidence, she convinced the other children to join in creating a small training club. Her idea was accepted. Soon the young Jockey Club was up and running.

Diane Crump started experimenting with older horses. She started riding the over one-year-old ponies. This gave her more confidence. In no time she was practicing with full-grown horses. The process was gradual though. The friendly horse trainers at the track allowed her to ride horses who were recuperating from injuries. Crump was now ready to compete in her dream races. On hurdle stood on her way to achieving her dream. Female riders were not allowed to race in horse derbies.

This was however to change. At the behest of her colleagues, Diane Crump joined the race at the Hialeah track in Miami. This was in 1969. She was only 20 years of age. Due to the prejudice from men in the crowds, Crump was escorted to the field by a heavy presence of policemen. The male jockeys pulled out of the race. When the organizers of the race threatened to fine them for absconding, they returned for the race. In her ever race; she came in ninth in the field of twelve jockeys. She became an instant celebrity. That year she won few other races she competed in.

The following year was iconic for Crump. She entered the Kentucky Derby at the wish of her employer. She competed in the race atop her owner’s horse called Fathom. Crump was twelfth out of seventeen competitors. History had been written. More and more female jockeys started competing in the derbies.

As the pinnacle of female jockeys, Diane Crump got mere offers to compete. A notable race was when she competed in a two horse race in Puerto Rico. With no rules in place, the male Puerto Rican opponent tagged into the leash straps of Crump’s horse. Realizing that she had to act fast, Crump started hitting him with her riding whip. The scene went on until he entangled himself. Eventually, he won the race. Crump won the admiration of the crowd, especially her fellow women. The male jockey was received by boos and pelted by tomatoes.

Diane Crump's love of riding horses exposed her to many dangers. Over the years she had brushed off many minor injuries. On February 1989, while riding on a horse, Crump suffered a near-fatal accident. Her horse tossed back and fell on her. The crushing weight of the horse caused multiple fractures on her body. She was released from the hospital with stern warnings from the doctors. She was not to ride horses again. Crump stayed away from the track for a while. When she thought that she was well, she returned. She raced in a short period, but the effects of the injuries took her off the track in 1998.

In her racing life, Diane Crump competed in hundreds of races. She won 235 of all the races she entered. Currently, she owns her horse breeding and training program in North Virginia called Diane Crump Equine Sales.

Giving up was a foreign vocabulary in the world of Diane Crump. Her persistence to achieve her goals was manifested early in life. She got her pony at twelve years. Crump dared to compete in a field that was traditionally a preserve of men. After her fending off the public insults, her resilience on the field silenced the critics. This opened the gates for other women jockeys to achieve their dreams in horse riding. Even in her retirement, she is still active in promoting the talent of young female jockeys.

She realized her potential and went for it. Crump lived for her passion and lived her dream well.