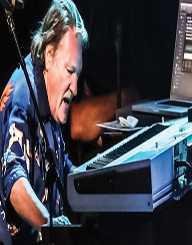 Brian Auger was born on July 18, 1939. He is an English jazz and rock keyboardist. He plays the Hammond organ.

In 1964, Auger established a band titled ‘The Steampacket’ alongside Vic Briggs, Julie Driscoll and Rod Stewart. The band started having problems, and they ultimately broke up. In 1965, he played the song ‘For Your Love’ by The Yardbirds. He later recorded several hit singles with the band ‘Trinity’ and Julie Driscoll. They recorded songs such as ‘This Wheel’s on Fire’ and ‘Road to Cairo’ among others. In 1969, they performed in the television network special ‘331/3 Revolutions Per Monkee’. In 1970, he founded the ‘Jazz Fusion’ ensemble. In 1971, Auger appeared and produced the album ‘Mogul Thrash.’ In the 1980s he toured with Kim Simmonds, Tim Bogert, and Greg Errico in their band ‘Maestro.’ In 1986, he played the keyboard for the Italian singer Mango on his album ‘Odissea’.

In 1989, he was the musical director for the series ‘Villa Fantastica. In the 1990s, Auger toured with Blues rocker Eric Burdon. In 1993, he recorded the album ‘Access All Areas’ with Eric. In 2012, he released the solo album ‘Language of the Heart’ which features Julian Coryell and Jeff Baxter playing guitars. He also brought back Oblivion Express. In 2014, he an Oblivion Express played at the KJAZZ festival in Los Angeles, California. They also toured in Europe and Japan.