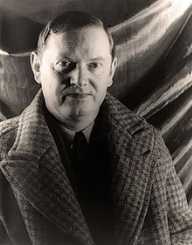 Evelyn Waugh was an English novelist and traveling journalist who covered milestone events in the world.

He was born Arthur Evelyn St. John Waugh on October 28, 1903, in London England. The son of Arthur and Catherine Waugh, he descended from a family of highly regarded British aristocratic scholars. Waugh grew up in a privileged family. He became fond of his mother than his father. He went to Sherborne School but transferred to Lancing College. He graduated from the religious institution to join college. He joined Hertford College, a constituent college of the Oxford University. Despite having good grades and a financial scholarship, Waugh never graduated from college.

As a child, Waugh exhibited mature literary skills above his peers. He started writing short stories to his family and schoolmates as a pupil in the lower grades. He wrote his initial fictional story when he was 7 years. He called it The Curse of the Horse Race. He continued advancing his writing skills throughout his secondary school life. When he transferred to the more religiously strict school Lancing College, Waugh spent most of his free time writing.

After dropping out of college, Waugh secured low paying jobs in a number of secondary schools. He used the income to facilitate his upkeep, as he pursued his artistic career. He visited his friend Anthony Powell who worked in a publishing company Duckworth looking for a job. He got a commission to produce a biography of Italian artist Dante Gabriel Rossetti. He completed his work and submitted it to Duckworth. Despite being praised for the good work, Waugh resented his input in the biography.

He joined the British forces to fight during WW2. He fought in continental Europe in several military missions. He was deployed to fight alongside the Partisans in Yugoslavia. He had missions with the Allied forces in Nazi-occupied France and other battlefronts in the war. Waugh based his future novels on the WW2 experiences and his religious awakening.

He retired from the army after the war. Waugh went back into the literary world. In 1945 he published his most acclaimed novel Brideshead Revisited. In the novel, he covered the experiences of a Roman Catholic military family that tries to cope with the horrors of WW1, after landing in Britain. In 1950, he published the novel, Helena. In the novel, he covered the religious conversion of Byzantine Queen Helena and the impact of her influence on his son King Constantine the Great. Historians categorized the novel as a projection of the Roman Catholic doctrine as the faith of choice.

He produced three novels serializing the effects of WW2. He published the first of the trilogy in 1952. He published Men at Arms, followed by the 1955 novel titled Officers and Gentlemen. He finished the series with the third novel titled Unconditional Surrender. In the three sequel novels, Waugh compares the WW2 as a struggle between good and evil. He also depicts the fighting as a competition between the civilized societies against the barbaric world.

Waugh traveled to Africa and South America writing journals for several publications. In 1930 he traveled to Ethiopia to cover the coronation of the new Ethiopian monarch. Emperor Haile Selassie 1, became the imperial leader of the Ethiopian empire on October 10, 1930. Waugh dismissed the elaborate coronation ceremony as a public relations gimmick to mask the brutal character of the new leader. The coronation was attended by world leaders and representatives of governments, including the British monarch.

He wrote biographies of historical figures like Edmund Campion in 1935, and Ronald Knox in 1959.

Waugh married his first wife Evelyn Gardner in 1928. The marriage lasted for two years until 1930. He married his second wife Laura Herbert in 1937. He fathered 7 children in his second marriage.

Despite his illustrious public career, Waugh suffered from addictions the public never knew. To cure his lack of sleep and depression, he indulged in excessive use of alcohol and sedative drugs to help his sleep. He gradually retreated from active writing from the early 1950s.

Evelyn Waugh succumbed to cardiac failure in his home in Somerset England on April 10, 1966. Apparently, he graced the local church to celebrate the Easter Mass and returned home. He died hours later in the day.

His work Brideshead Revisited transformed into a film in the 1980s. His grandson Alexander wrote about the family history basing on the life of his grandfather Arthur Waugh in his book Fathers and Sons. The genealogical book covered at least five successive generations.

Waugh left his aristocratic heritage and dropped out of college. He fought the family pressure to find his footing as a writer. He managed his career despite his conversion to Catholicism in the predominantly Protestant England.