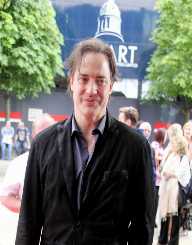 Brendan Fraser was born on December 3, 1968, in Indianapolis, Indiana, USA.

As a teenager, Brendan Fraser attended the Upper Canada College Preparatory School. It was around this time that he began to take an interest in acting. In the summers, he would often attend the Laughing Horse Summer Theater.

After high school, Fraser went on to attend the Cornish College of the Arts.

Brendan Fraser’s professional acting career began in 1991 when he appeared in the made-for-television movie Child of Darkness, Child of Light as John’s friend. Later on, in the same year, he also appeared in the film Dogfight. This is said to be one of the films that helped to jumpstart Fraser’s early career. In the next few years, Fraser’s career continued to grow as he earned roles in films like Encino Man, Younger, and Younger, With Honors, and Glory Daze.

By the mid-1990’s, Brendan Fraser was a household name. He acted in a variety of films, including comedies, war films, family features, and dramas. Some of his other popular films from the 1990’s include The Twilight of the Golds, Still Breathing, George of the Jungle, Gods and Monsters, and The Mummy.

In the 2000’s, Brendan Fraser began diversifying his portfolio. In 2000, he worked on a voice acting role for the animated film Sinbad: Beyond the Veil of Mists and in 2002-2004 he appeared in his first recurring role on the television show Scrubs.

He would later go on to have recurring voice roles in the television shows King of the Hill and The Fairly OddParents. In 2006, he also began working as an executive producer. During this decade, he produced and acted in the films The Last Time and Journey to the Center of the Earth. Some of the other films that he acted in during this decade include Bedazzled; The Mummy Returns, Looney Tunes: Back in Action, The Mummy: Tomb of the Dragon Emperor, and Inkheart.

As of the 2010’s, Brendan Fraser continues to act and produce films. So far, he has produced three films this decade: Furry Vengeance, Stand Off, and Breakout, all of which he also acted in. Some of the other films he acted in so far in this decade include A Case of You, Escape from Planet Earth, The Nut Job, and HairBrained.

Throughout his long career, Brendan Fraser has won almost a dozen awards and has been nominated for almost a dozen others. Some of his most impressive acting awards are listed below.

Brendan Fraser married Aftron Smith in 1998. This couple has three children together: Griffin, Holden, and Leland. However, this couple later divorced in 2008.