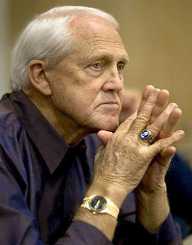 Bill Walsh was born on November 30th, in 1931. He garnered immense fame after coaching the San Francisco 49ers. During his tenure, he promoted offense gameplay that was termed as the West Coast offense. This is an offensive style of play where players are encouraged to pass the ball more instead of running.

William Ernest Walsh alias Bill Walsh was born on November 30th, in 1931. His place of birth was in Los Angeles.

While studying in Hayward High School, Bill Walsh played the position of a running back in football. After this, he went to the College of San Mateo where he played as a quarterback. After a period of two seasons, he moved to San José State University, this time playing on the defensive end and tight end. Aside from football, Walsh also tried his luck in boxing as he competed in intercollege games.

After earning his degree, Bill Walsh continued studying at San José State University where he later obtained his master’s degree in 1959. Taking master’s classes gave him an opportunity of working with Bob Bronzan as his assistant coach for the school’s team.

However, after he earned his master’s degree, he went on to coach at Washington High School situated in Fremont, California. Aside from coaching the football team, he also coached the institution’s swimming team.

With time, Bill Walsh landed himself on the post of an assistant coach with the Oakland Raiders in the American Football League. A year later, in 1967, he changed teams and went on to coach the San Jose Apaches.

This was a team that played in the Continental Football League. He performed well as their head manager as he helped his team finish second in the league. Unfortunately, the following year the Apaches terminated their football operations.

Bill Walsh continued landing on some coaching responsibilities before finally going to coach the 9ers in 1979. His first season was miserable. Nonetheless, he managed to convince the organization that his philosophy would work. His contribution to the team was evident as their game changed considerably.

In 1981, his team bagged home Superbowl. They continued to emerge the champs both in 1984 and later in 1988. Following the excellent performance, this gave Walsh the opportunity of serving as the 9ers coach for about ten years. His good performance was contributed mainly by the West Coast offense style of play that they adopted and perfected.

In 1954, Bill Walsh tied the knot with Geri Nardini. The pair had three children together.