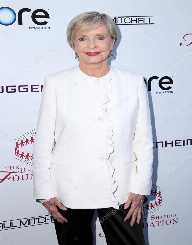 Florence Henderson was born on February 14th, 1934. She is remembered for being an actress who was active in the acting industry for six decades. Her acting career took off on Broadway theaters. Henderson quickly moved up the ranks of her acting career when she featured on TV as the first female host to the show The Tonight Shows. Her big break came in 1969 with the role she played in The Brady Bunch. She also earned herself nationwide fame by featuring in The Florence Henderson Show as the host in 2007 to 2009. Henderson passed away at the age of 82.

Born on Valentine’s Day in 1934, Florence Henderson rose to become a household name both in the film and in the TV industry. Her place of birth was in Dale, Indiana. She was born in a family of 10 siblings where she was the youngest daughter. Her father’s name was Joseph Henderson. He worked as a tobacco sharecropper. On the other hand, her mother was called Elizabeth. She was a homemaker. During her tender years, Henderson was taught to sing by her mother. She honed her singing skills, and by the time she was 12, she was a talented singer singing in grocery stores. For her education, she went to St. Francis Academy situated in Owensboro, Kentucky and graduated in 1951. Shortly after this, she joined American Academy of Dramatic Arts where she would pursue her acting career.

At the beginning of her acting career, Henderson ventured into musicals and performed in South Pacific and Oklahoma!. It did not take time before she landed on Broadway cast on Wish You Were Here – 1952. Her exceptional performance got her to act in Fanny -1954 for about 888 performances. She continued with her on-stage career to the late 60s.

With the popularity that she had gained on stage, Florence Henderson switched to TV and quickly featured in some shows including I Spy – 1956. Other shows followed suit during the 1950s. During the early 60s, she guest hosted The Tonight Show. This made her the first woman to ever guest host this show. She also appeared on TV as the Today Girl on The Today Show in 1959 to 1960. Her role was to cover the weather news on the TV show. Other shows that she featured in around this time include Password – 1962 to 1967 and The Dean Martin Show -1968.

Henderson’s career turning point came to light in 1969. She was to feature in The Brady Bunch as Carol Ann Brady. This was the role that landed her in the spotlight for several years. She went on to play in the TV series for 117 episodes.

The first husband to Henderson was Ira Bernstein. The pair had four children together. Their marriage came to an end in 1985 after they divorced each other. Two years later, in 1987, Henderson got married for the second time to John Kappas. This marriage lasted until the time of his death in 2002.

Florence Henderson suffered heart failure while undergoing treatment at Cedars-Sinai Medical Center located in Los Angeles. She passed away on November 24th, in 2016. She was 82 years old at the time of her demise.