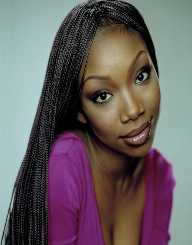 Brandy Rayana Norwood is popularly known as Brandy. She was born on February 11th, 1979. Aside from being a famous American singer, she is also a songwriter and an actress. Her place of birth was in McComb, Mississippi in the United States.

Brandy was born into a family that was inclined to music. This contributed to her early involvement in music. By the time she was fifteen years old, Brandy had already released a self-titled album. Her first album featured the hit song "I Wanna Be Down."

Brandy was born on February 11th, 1979. She is the oldest and the only daughter of Sonja Norwood, her mother, and Willie Norwood, her father. Her father is a former gospel singer. When Brandy was young, she began honing her singing skills in their family’s church choirs.

Brandy’s younger brother is called Ray J. She is also the cousin of a rapper, Snoop Dogg. Brandy’s music idol when she was young was Whitney Houston. She recalls finding Houston’s voice as powerful, and this inspired her much to pursue her music career with the hopes of one day becoming like her.

Shortly after, Brandy got the help and support she needed from her parents to fight for her music career. She began performing in various talent shows and showcases. Her first big break in her music career came when she was in her 9th grade.

Brandy landed on a singing contract with Atlantic Records. During this time, she also featured in ABC’s sitcom called Thea. Starring in this show aided Brandy to attract a large following to her side.

It did not take long before Brandy was working on her first self-titled album. This album was released in 1994. One of the songs that were groundbreaking on the album was "I Wanna Be Down." The single was an immediate hit, and it went to top the Billboard charts within a short period. The song lasted for four weeks while playing as the top-rated hit song in her album.

Sonja Norwood worked as her manager and ensured that her daughter sang songs that were well received by her fans. Another song that topped the charts from the album was “Baby.” Both “Baby” and "I Wanna Be Down" got platinum certification from Recording Industry Association of America.

Two years after releasing her first album, Brandy starred in Moesha, a UPM sitcom. The TV show was aired for six seasons with 127 episodes being released. Her packed film career did not hinder her from singing during this period. Her second album titled Never Say Never came in 1998. This album was another major hit for Brandy’s music career. "The Boy is Mine" was a hit song featured on the album which led to the success of her second album.

Brandy’s early success gave her the opportunity of switching careers while she was still young. Apart from singing, she also ventured into modeling. She also continued singing and released her third album called Full Moon in 2003. During the same period, Brandy and her then-boyfriend were blessed with their first girl child, Sy'rai Iman Smith. Robert Smith was the father of her first child. He was a music producer.

A year later, Brandy released Afrodisiac which marked her fourth album. After this release, she was absent in the music industry for four years. She came back with her fifth album in 2008 named Human. In 2010, she also featured on TV while contesting in the dance TV show Dancing with the Stars. She also starred in Brandy and Ray J: A Family Business which was a series featuring her younger brother and her parents. Two Eleven, her sixth album was released in 2012.

After separating from her boyfriend, Smith, Brandy, she went ahead and dated Quentin Richardson, an NBA guard who played for the Los Angeles Clippers. The two got engaged in 2004. Nonetheless, the pair never got married as their engagement came to an end after 15 months. In late 2012, Brandy got committed to Ryan Press. The two broke off their meeting in 2014.