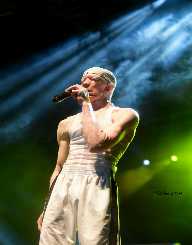 King Yellowman was born 15th January 1956, in Kingston, Jamaica. Yellowman was abandoned by his parents and was raised in orphanages. The first was Maxfield Park Children’s Home, followed by Alpha Boy’s Home.

He was born an albino and was ridiculed by others as the condition was not socially acceptable in Jamaica.

Foster became known as King Yellowman due to his condition. In the late 1970s, Yellowman won the Tastee Talent Contest. The event was for deejays, and it catapulted him to stardom in Jamaica.

In the ensuing years Yellowman's popularity continued to grow, and in 1981, he became the first dancehall artist to be signed by a major American label, which was Columbia Records.

Yellowman's first album was called Mister Yellowman, released in 1982. He went from strength to strength with his career. His initial work had a lot of sexually explicit material which attracted criticism, but it helped him gain the popularity he had.

By the mid-1990s he was releasing material that was socially conscious, which helped the growth of his international stardom. Yellowman also featured on a track with Run-DMC.

King Yellowman married Rosie Foster in 1985. The couple have a daughter, Kareema, who has also become a musician.

He is also distinctive with his disfigured face, and this was due to a skin cancer that he was diagnosed within 1982. He had the tumor removed, but a large area of his jaw had to be removed when he had an operation in 1986.