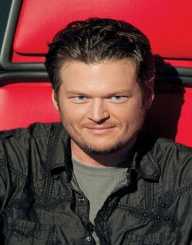 Blake Shelton is a country singer and a songwriter.

Blake Shelton was born in Ada, Oklahoma, on June 18, 1976. By the age of 16, Shelton toured the bar circuit, garnering statewide attention and winning the Denbo Diamond Award, the top award for young entertainers in Oklahoma. Two weeks after graduating from high school, in 1994, he moved to Nashville to launch a songwriting career.

Blake Tollison Shelton was born on 18th June 1976 in Ada, Oklahoma to Dorothy and Richard Shelton. He has older half-brother Richie and sister Endy, Richie died in a car crash in 1990. Blake’s mom entered him into a beauty pageant when he was eight years old, using singing as a talent. As it was not a boy pageant, he competed with the girls.

Blake Tollison was taught how to play the guitar by his uncle, and he started singing from an early age. He also began to write songs and wrote That Girl Made a Fool Out of Me at the age of fifteen. He graduated in 1994, from Ada High School, he did not pursue higher education.

Inspired by Mae Boren Axton, Blake moved to Nashville two weeks after his graduation from high school. In Nashville, his first job was painting Mae’s house and a music publishing company.

Blake Tollison was fired from the publishing company for not doing his job, as he was busy talking with the songwriters. He met Bobby Braddock in 1997 and gained a production contract with Sony Music, where he sold the songs he had written.

In 2001, he released his debut single Austin with Giant Records. Blake was transferred to Warner Bros. Records; it's parent company after Giant Records closed down. His success leads to a self- titled debut album, produced by Bobby Braddock. And the record received platinum certification from the Recording Industry Association of America (RIAA).

After his fifth album, Blake Tollison released two more singles and a compilation of his first greatest hits. Loaded: The Best of Blake Shelton was published in 2010, and he was later invited to join the Grand Ole Opry via Twitter. Trace Adkins confirmed the invitation, and Blake was formally inducted into the Grand Ole Opry on October 23, 2010.

Blakes rise to fame also came from an appearance in the television show The Voice since 2011 as judge and voice coach, his scored five victories with numerous hopefuls. Blake also sang Friends for the Angry Birds movie soundtrack, and was the voice of Earl the Pig. in 2016; Blake celebrated his Blake Shelton: Based on a True Story exhibit at the Country Music Hall of Fame and Museum.

Blake Tollison has ten music albums and twenty- seven singles. He also had television and film appearances. In 2017, Blake is touring in the Doing It To Country Songs Tour.

Blake Shelton was inducted into the Oklahoma Hall of Fame in 2014 for his achievements in the music industry. In 2017 he won People's Choice Awards, with album If I’m Honest for Favorite Male Country Artist and Favorite Album.

Blake Tollison married first wife Kaynette Gern in 2003 when he was on a break from a tour. They were high school sweethearts and tied the knot in Tennessee. Kaynette managed his affairs and helped maintain his tour life.

In 2011, Blake and Miranda Lambert married in Boerne, Texas. They performed a duet at the 2012 Super Bowl XLVI. The couple also won song of the year for Over You, a song that was written for late Richie Shelton. In 2015, the couple announced their separation and divorce.

In late 2015, Blake was dating Gwen Stefani, fellow judge of The Voice.

He was also reported saving a man from the flood in Oklahoma after he was stranded and drove the stranger home after.

Blake Tollison had also staged relief concert for victims of the 2013 tornado, the ‘Healing in the Heartland: Relief Benefit Concert’ for the Oklahoma May Tornadoes Relief Fund was a telethon with many artists helping out.