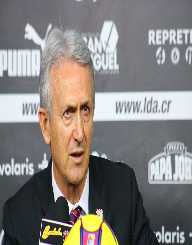 On June 2, 1952, Benito Floro Sanz was a Spanish football manager. Benito Floro is the current manager for Liga Deportiva Alajuelense. Before taking up his current job, he served as the Canadian national team from 2013 to 2016. He has served various capacities in clubs including Real Madrid, Spot in  Gijon, Barcelona, and Alzira among several others.

Benito Floro was born on June 2, 1952, in Gijon, Asturias, Spain. Much is not known about his childhood life, education and other youth development. Benito Floro, however, has a son, Anthonio who also took over his father’s profession. Anthonio also worked in Canada.

Benito Floro starting his professional coaching job in 1978 with Silla until 1980 when he moved to Torrent. He spent three years with the team Torrent before moving to Denia to work from 1983 to 1984. From 1984 to  1989, he worked with teams including Gandia, Alzira, Ontinyent, Olympic Xativa, and Villarreal. He then moved to Albacete Balompie in 1989. Benito Floro worked with the team at the Segunda Division B and gained them their first ever qualification into the La Liga after two years. Benito Floro then managed Real Madrid from 1992 to 1994, winning the Copa del Rey in his first season and the Supercopa de Espana in 1993. After the two-year job with Real, he moved to Albecate and served from 1994 to 1996 and then to Sport in de Gijon in 1997.

Benito Floro movement from one team to the other continued and the maximum years with a team was two years. Benito Floro managed Vissel Kobe in 1998 and spending just a season moved to Club de Futbol Monterrey, serving from 1999 to 2001. From 2002 to 2004, he managed Villarreal and won the UEFA Intato to Cup with the club. Floro finally moved from the Yellow Submarines to manage RCD Mallorca but left the team after some few months to take a brief appointment at Real Madrid as the director of football in 2005.

Benito Floro then worked as a sports commentator at Telecinco. He later returned to coaching by taking up Barcelona Sporting Club in 2009. From 2011 to 2012, he worked with WAC until July 5, 2013, when Benito Floro was announced by the Canadian Soccer Association as the manager of the national team. Benito Floro took over from Colin Miller and served until 2016 when the Association refused to extend his contract after failing to qualify the team for the 2018 FIFA World Cup. Benito Floro is currently the manager of Alajuense.