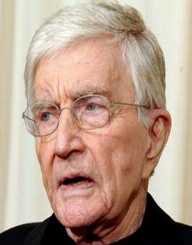 William Blake Crump known in the entertainment circle as Blake Edwards was an American filmmaker. Born on July 26, 1922, he began a career as an actor before later switching into television and film directing and producing. His works encompass different genres including comedies, drama, detective, and musical films.Edwards was also a screenplay and radio scriptwriter. As a film and television director, he is known for works like Breakfast at Tiffany’s, 1961, Days of Wine and Rose, 1962 and Victor Victoria.

He directed the Pink Panther film series, starring Peter Sellers, which became a huge success at the box office. During the latter part of his career, he ventured into writing, producing, and directing theatre works. Blake Edwards received an Honorary Academy Award in 2004 for his film career.

Blake Edwards was born to Donald and Lillian Crump on July 26, 1922, in Tulsa, Oklahoma. His father abandoned the family even before his birth. With this Lilian married her second husband, Jack McEdwards. McEdwards moved the family to Los Angeles in 1925, where he worked as a film production manager. Edwards received education his early education in a grammar school after which continued to high school all in Los Angeles California. In 1971, Edwards granted an interview to the Village Voice saying he "always felt alienated, estranged from my own father, Jack McEdwards."

After graduating from high school, he started an acting career during the World War II. According to him, he worked with the best directors including John Ford, Otto Ludwig Preminger, and William Wyler. However, he said, “I wasn't a very cooperative actor. I was a spunky, smart-assed kid. Maybe even then I was indicating that I wanted to give, not take, direction.” Edwards was later drafted to serve in the United States Coast Guild during the war. During the war, he suffered a severe back injury, which would leave him in pain for many years.

That same year he produced the CBS adventure series, Mr. Lucky, starring Ross Martin and John Vivvan. Both projects featured music by Henry Manchi. In 1960, he directed High Time, 1960, wrote and directed, Mister Cory, 1957, and This Happy Feeling, 1958. In 1970, he directed Darling Lili starring his wife, Julie Andrews. The film was produced at a cost of $17 million was a big-time commercial failure, which almost brought Paramount picture to a verge of collapse.

Blake Edward's first big budget film was Operation Petticoat in 1959 starring Cary Grant and Tony Curtis. The film was a shot him into the limelight as it became very successful at the box-office. In 1961, he directed the film Breakfast at Tiffany’s based on the novel of the same name by Truman Capote. His next successful work was Days of Wine and Roses in 1962, starring Lee Remick and Jack Lemon. It is about the effects of alcoholism on a once blissful marriage

Edwards was the director for most of the comedy film series The Black Panther, all those that starred Peter Sellers as Inspector Clouseau. Black Panther was a huge commercial success. The Return of the Black Panther, 1975 made at a cost of $2.5 million grossed about $100 million. The following project The Pink Panther Strikes Again (1976) was extremely successful exceeding the latter.

Edwards received an Honorary Academy Award for cumulative achievements over the course of his film career in 2004.

Blake Edwards married twice first to actress Patricia Walker in 1953. The couple had two children, Jennifer Edwards and Geoffrey Edwards. They divorced in 1967. In 1969, he married hissecondwife Julie Andrews who was 13 years his junior. Julie had a daughter called Emma from her previous marriage. In the documentary I Remember Me, Edwards described how he battled with chronic fatigue syndrome for 15 years. He died on December 15, 2010,from a complication of pneumonia at the Saint John’s Health Centre in Santa Monica, California.