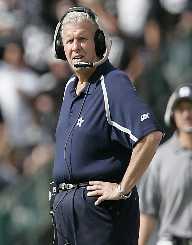 Duane Charles Bill Parcels was born on August 22, 1941, in Englewood, New Jersey. His mother Ida Parcells was a housewife. His father used to be a quarterback at Georgetown University, and later worked for FBI and became a lawyer for Uniroyal Tires.

While Bill was in high school, Parcells family moved to Oradell, and he began attending River Dell Regional High School. In his youth, Parcells was very athletic and played football, baseball, and basketball in his school’s teams. After high school, Parcells enrolled at Colgate University. He was then offered a contract with the Philadelphia Phillies. However, Bill declined the offer, since his father disapproved of him pursuing a career in professional sports, instead encouraging him to become a lawyer. Parcells transferred to Wichita State University and played as a linebacker. He earned a physical education degree.

Since Bill Parcels did not pursue a playing career, he instead decided to become a coach. In 1964, he began working as an assistant coach at Hastings, but the following year he moved to Wichita State. He later worked as an assistant coach at Army, Florida State, Vanderbilt and Texas Tech. In 1978, he became the head coach at Air Force Academy. In 1979, Parcells became the defensive coordinator for New York Giants, but before the beginning of the season, he took a job in the land development company. He spent a year in Colorado, and often cited this year to be the worst in his life. He felt deeply dissatisfied with his life and in 1980 returned to sports and the linebackers coach for New England Patriots.

After his second Super Bowl win, Parcells retired from coaching and began working as a sports analyst for NBC Sports, a position he held until 1992. However, he then made a deal with Tampa Bay Buccaneers to become their head coach but backed out of his agreement. In 1993, Parcells returned to NFL as the head coach for the New England Patriots. Under his leadership, the team quickly rose in their stats and 1996; the team went to Super Bowl XXXI. After a disagreement with the team’s owner, Parcells left the Patriots, instead of becoming the coach for The New York Jets.

With the Jets, Parcells rose the team's record to 9-7 in his first season, which was a major accomplishment, since the team had won only ten games in the previous three seasons. In 1984, the Jets won the playoffs. The following season, Jets were expected to go to the Super Bowl, however, when the lead player Vinny Testaverde ruptured his Achilles tendon, the team statistics quickly went down. In 2003, Parcells became the head coach at Dallas Cowboys. His first season, he led the team to the playoffs and became the first coach in NFL history to lead four different teams to the playoffs. He finished working with the Cowboy’s with a 34-30 record, and no wins in the playoffs. In 2007, he announced his retirement and became a studio analyst for ESPN.

In 2007, Bill Parcels became the Executive Vice President of Football Operations of the Miami Dolphins. As his first job, Parcells fired the head coach Cam Cameron, manager Randy Mueller and several assistant coaches. He made several changes in the player lineup, which turned out to be successful. The Dolphins scored an 11-5 record in 2008 season and became the AFC East champions. He remained with the team until 2010.