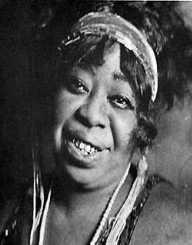 American blues singer Ma Rainey was born Gertrude Pridgett on the 26 April 1882 in Columbus, Georgia. Her parents were Thomas Pridgett and Ella Allen, and she had four siblings.

Ma Rainey began performing as a preteen when she appeared in a talent show in Columbus, Georgia. She also took part in black minstrel shows and sang in the church choir. Her first group was the Alabama Fun Makers Company, and in 1906 she joined the Rabbit’s Foot Company. By 1914 she was performing with her husband as part of Rainey and Rainey, Assassinators of the Blues. Around this time she visited New Orleans and was introduced to Louise Armstrong, Betty Smith, and other musicians and singers.

In 1923,  Ma Rainey signed a recording contract with Paramount Records after producer J. Mayo Williams had seen her performance. Recordings included Bad Luck Blues, Moonshine Bl7es and Bo-Weevil Blues and she soon built up a national following. She also recorded with Louis Armstrong and toured the country with the Wildcats Jazz Band. Rainey recorded over a hundred songs and in 1935 retired from performing professional and relocated to Columbus Georgia where she ran a number of theatres.

Ma Rainey is generally considered the first of the classic blues singers to receive national recognition. A play about Rainey by August Wilson, Ma Rainey's Black Bottom, won a Pulitzer Prize in 1982. She was posthumously inducted into the Blues Foundation’s Hall of Fame in 1983 and in 1990, into the Rock and Roll Hall of Fame.