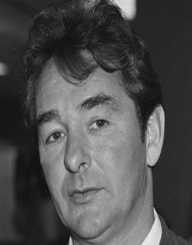 English footballer and football manager Brian Howard Clough was born in Middlesborough, England on the 21 March 1935 into a family of nine children. He would later say that he had a happy upbringing.

Brian Clough was a pupil at Marton Grove Secondary School. He played sport at school and was also the Head Boy in his final year. He left school at 15 without matriculating (1950).

After leaving school, Brian Clough worked as a clerk before being called up to do his national service (1953-1955) with the RAF.  Clough’s early football was played at Billingham Sythonia. When he returned from doing his national service, he signed to the Middlesborough Football Club as a centre-forward. Around this time he met goalkeeper Peter Taylor. He was also capped twice for England playing in the national team against both Sweden and Wales in 1959.

He transferred to Sunderland in 1961 and scored 63 goals from a total of 74 games. He made 274 appearances with Middlesborough and Sunderland, scoring 251 goals which were a post-war record. Brian Clough was injured in a clash with goalkeeper Chris Harket in Boxing Day 1962 where he tore ligaments in his knee. In 1964, he returned to the game, played three games but retired from playing due to the knee injury.

Brian Clough joined Fourth Division Hartlepool as a manager when he was 30 years old. This made him the youngest manager in the Football League at that time. He had two successful seasons with Hartlepool then joined Derby County. In 1969, Derby won the Second Division title and in 1972, the League Championship. He had a dispute with the directors of the club in 1973 and was forced to resign from the club. Derby fans were unhappy with the decision and marched in Derby in protest against the decision of the directors.

Clough then joined Brighton for nine months before being offered a position with Leeds United. He was only there for 44 days before the players objected to his aggressive management style and he was dismissed from the club.

Brian Clough then moved to Nottingham Forest (1975), and in 1977, the club was promoted to the Second Division. Nottingham Forest went on to win the League Cup four times, two European Cup titles and a League Championship with Clough as team manager. Nottingham Forest did not manage an FA Cup win under Clough and lost to Spurs in 1991 final. At this stage, he was the longest-serving manager in the league. After 18 years with Nottingham Forest, Clough retired.