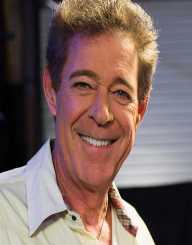 Barry Williams born is an American actor known for his role as Greg Brady on the ABC television series The Brady Bunch. Born on September 30, 1954, he started acting as a child playing minor roles in television series. His first known role was as Stanley in Run for Your Life episode The Company of Scoundrels in 1967. He has since played roles in several films and television including General Hospital, Murder, She Wrote, Full House, Hollywood 7, MegaPiranha and The Loud House among others. Barry Williams autobiography Growing Up Brady: I Was a Teenage Greg became a New York Times bestseller.

Barry Williams was born on September 30, 1954, in Santa Monica, California. He is the youngest child of three by Doris May Moore and Frank Millar Blenkhorn. His siblings are Craig and Scott Blenkhorn. Barry Williams and siblings were raised in Pacific Palisades, California. As a child, his dream was to become an actor, and that was realized as he made a television debut in 1967 in an episode of the series Dragnet.

After having a debut in Dragnet, Barry Williams had other minor roles in television series including The INVADERS, 1968, The FBI, 1968, That Girl, 1968, It Takes a Thief, 1969 and Adam-12 in 1969. Barry Williams had his acting breakthrough with a role as Greg Brady on the sitcom The Brady Bunch in 1969. She would play that role and enjoy the fame that comes with it until it was canceled in 1974. In 1989, he was honored with a Lifetime Achievement Award from the Young Artist Foundation for his role in The Brady Bunch.

Life After The Brady Bunch

Barry Williams continued to play several guest roles after the discontinuation of The Brady Bunch in 1974.

He later joined the musical theatre going on tours with productions like West Side Story, Grease, and The Sound Music. Barry Williams made a Broadway appearance in the musical Romance/Romance alongside Alison Fraser and later became the male lead player. Barry Williams had a role in General Hospital, 1984, playing the role of an English con man Hannibal. In 1988, he appeared in the Brady Bunch TV movie reunions including A Very Brady Christmas. His other roles include Manager Dean in Hollywood 7, Dickie Roberts: Child Star, 2003 and Mega Piranha in 2010.

Barry Williams was part of Fox television show, Celebrity Boxing in 2002. His boxing match was with Danny Bonaduce, which he lost. In 1992, he released an autobiography Growing Up Brady: I Was a Teenage Greg co-written by Chris Kreski. The autobiography became a New York Times bestseller and later adapted into a TV movie Growing Up Brady in 2000. The movie starred Adam Brody as Williams.

Fracas With The Actors’ Equity Association

In 2001, Barry Williams and the Actors’ Equity Association, which represents stage actors, had a dispute after starring in a non-union tour, The Sound of Music as Captain Von Trapp. The association, therefore, fined him $52,000.

However, Barry Williams termed the fine as illegal and filed a complaint with the National Labour Board. He argued that during the tour, he had resigned from the union since September 2000, but the union had contrary views. According to them, Barry Williams was still a member during the contract negotiation for the role. He has been reinstated since 2005.