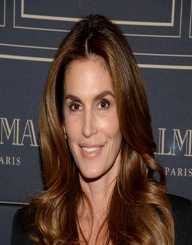 American model and actress Cynthia Ann Crawford was born on February 20, 1966, in DeKalb, Illinois, the United States of America to Jennifer Sue Crawford-Moluf (née Walker) and John Daniel Crawford. A descendant of Charlemagne, Crawford had her roots in the continental royal families of the Middle Ages with ancestry in the English nobility. Her predecessors spent generations on the American soil and mostly originated from English, French and German descent.

Out of her three siblings, her only brother Jeffrey died of childhood leukemia at the age of 3.  Cindy Crawford’s father worked as an electrician, and her mother was employed as a bank teller. She attended the DeKalb High School and graduated from there in 1984 as a class valedictorian. A local news photographer, Roger Legel spotted her and took a photograph of her. The picture was published on the cover of the DeKalb Nite Weekly and received a positive response.

With the new found confidence and enthusiasm, Cindy Crawford participated in Elite Model Management’s Look of the Year contest at the age of 17. She went all through to the finals and became the runner-up. The name and fame she earned in becoming the finalist of the contest, helped her secure modeling assignments through the Elite Model Management Agency, one of the largest modeling agencies of the world.

In the academic front, being a meritorious student, Cindy Crawford was able to earn an academic scholarship to study chemical engineering at Northwestern University after her high school graduation. However, after completing her freshman year, she dropped out to pursue a full-time modeling career.

Cindy Crawford embarked upon a full-fledged modeling career in 1986. She relocated to the New York City to facilitate her professional modeling career and was able to secure work immediately. Soon, the big moment of her modeling career arrived when she was chosen as the cover model of the August 1986 issue of Vogue, the leading fashion magazine. She continued to appear on the cover pages of many renowned fashion and lifestyle magazines throughout the 1980s and 1990s including the likes of Cosmopolitan, Harper's Bazaar, W, People, Allure, and Elle.

Cindy Crawford had a trademark facial mole just above her upper lip and an athletic, full-bodied physique. With a height of 5 foot 9.5 inches, her superb body attracted both men and women alike. In July 1988, she became the first modern fashion model to appear nude in the men’s magazine ‘Playboy.’ She was also chosen to host the fashion television show ‘House of Style’ (1989-95) which accounted for a 50% male audience.

Crawford gained international recognition with the signing of a multimillion-dollar contract with Revlon, American multinational cosmetics, skincare, fragrance and Personal Care Company. Apart from Revlon, she also worked with other major brands like Escada, Gianni Versace, and Ink. A new trend was set when in the January 1990 issue of the British Vogue magazine, Cindy Crawford was featured on its cover page alongside four other top fellow contemporary models viz., Linda Evangelista, Naomi Campbell, Tatjana Patitz and Christy Turlington.

The assembling of such top models together created quite a sensation, and the respective models were once again selected to participate together in the pop singer George Michael’s Freedom ’90 music video. Top fashion designer Gianni Versace hired Crawford, Campbell, Evangelista, and Turlington to walk the ramp simultaneously to the video at his couture show (1991).

The audience well received the exercise and the sensational models were greeted with a standing ovation. The event marked the creation of the word ‘Super Model,’ used to mention the top fashion models who appeared simultaneously on the covers of the world’s leading fashion magazines and their identity is recognized worldwide by their first name only.

Cindy Crawford successfully launched a career in business diversifying from modeling and venturing into multiple industries. She started her own production company Crawdaddy Inc. The company was created to manage her career exclusively. In 2005, she created a line of beauty products with Jean-Louis Sebagh called ‘Meaningful Beauty for Guthy-Renker.’ A new range of furniture under the "Cindy Crawford Home Collection" name was launched in the same year.

In 1995, Cindy Crawford debuted in the Hollywood movie ‘Fair Game’ in the role of the main female protagonist. The film was a box office flop. She appeared in two consecutive fashion documentaries, ‘Unzipped’ (1995) and ‘Catwalk’ (1996) during this time. She wrote a book about makeup and published the same in 1996 titled ‘Cindy Crawford’s Basic Face: A Makeup Workbook.’ The third installment of her fitness video trilogy ‘Cindy Crawford: A New Dimension’ was released in 2000.

The supermodel era marked its end during the late 1990s. In the October 1998 issue of the Playboy magazine, Crawford again posed nude on its cover to promote her unique program on ABC television ‘Sex with Cindy Crawford.’ The show, however, failed to elicit the desired response. The fashion brand Revlon did not renew its contract with Crawford after a decade-long partnership, and in 2000 she retired from modeling.

Cindy Crawford again returned to modeling in May 2011. The Vogue Mexico magazine cover of May 2011 featured her photograph. Crawford along with her daughter Kaia appeared on the cover page of the April 2016 issue of Vogue Paris. She appeared on the cover pages of more than 1000 magazines during her modeling career and walked the ramps for world’s leading fashion brands like Christian Dior, Chanel, and Valentino.

Cindy Crawford married Hollywood actor Richard Gere in 1991. They were eventually divorced in 1995. Crawford again married businessman and former model Rande Gerber on May 29, 1998. The couple was blessed with two children, son Presley Walker Gerber (born July 2, 1999) and daughter Kaia Gerber (born September 3, 2001). Both of them are at present working in the modeling industry.