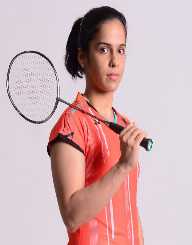 Saina Nehwal was born on March 17th, 1990. She is a professional badminton player who is also ranked as one of the world’s best in the sport. Since 2009, Nehwal has maintained her world’s ranking in the sport for being among the top ten best. Throughout her career, she had bagged more than 20 international titles. Among the 20 international titles, she is a proud winner of 10 Superseries titles. In 2009, Nehwal was ranked as second best in badminton worldwide. Later on, in 2015, she emerged victorious for being the world’s number one. Her career achievements made her the only Indian woman ever to achieve such.

Saina Nehwal was born on March 17th, in 1990. She is the daughter of Harvir Singh, her father, and Usha Rani, her mother. Her place of birth was in Hisar District in Haryana in India. Rani, her father was a worker at the Chaudhary Charan Singh Haryana Agricultural University. When Nehwal was young, she schooled at Campus School CCS HAU located in Hisar. Nehwal’s family later migrated to Hyderabad. It is while residing here that Nehwal pursued her high school education at St. Anne’s College Mehdipatnam.

Nehwal’s interest in badminton paved the way for early training from her coach Nani Prasad. Later on, she was trained by S. M. Arif, an award-winning coach in the badminton game. Things improved with time as she perfected her badminton skills. In 2006, while playing the under 19 championships, she emerged the winner. Winning the Asian Satellite Badminton for two times also proved to the world that Nehwal was ready to go professional and contest with the world’s best.

In 2006, Saina Nehwal ventured into junior world championships, and she performed well in several tournaments. During the same year, she was the winner of the Philippines Open tournament. Similarly, she was second best in BWF World Junior Championship hosted the same year. In 2008, she did her best to win the World Junior Badminton Championships. Nehwal also managed to reach quarterfinals at the Beijing Olympics-2008. In September the same year, she won Chinese Taipei Open while playing against Lydia Cheah Li Ya from Malaysia.

Her winning streak did not stop there, in 2009, Saina Nehwal was crowned the Indonesian Open winner. This gave her the recognition of being the first Indian woman ever to win such a BWF Super Series title. In 2010, she was crowned the winner of several tournaments including Singapore Open, Indonesia Open, and Hong Kong Open.

In 2011, her performance went down as Saina Nehwal reached finals in some tournaments but was not in a position to win any of them. She did not give up following her dismal performance during this year. In 2012, she won several tournaments including Indonesia Open, Denmark Open and China Open. Nehwal was also a competitor in the 2012 London Olympics where she bagged home a bronze medal while playing the singles category.

In 2014, Saina Nehwal competed for the India Open Grand Prix title and successfully emerged victorious as the winner. She also got to the quarterfinals while competing for the All England Super Series Premier title. She also won the Australian Open title in 2014. Winning this tournament got her incredible rankings as the 7th best badminton player in the world.

Nehwal continued her winning streak in 2015 as she won the Indian Open Grand Prix Gold. She also performed well at the India Open BWF Super Series because she not only was the tournament’s winner but she also landed herself as the world’s number one badminton player.

Saina Nehwal lives a private life, and there is no information detailing her relationships with any man. She is still not married.