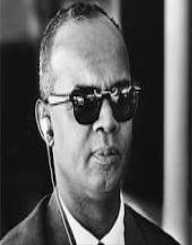 Port of Spain, Trinidad and Tobago

Eric Williams was dubbed as "The Father of the Nation" of the Republic of Trinidad and Tobago. He also took part in the message-writing, the Apollo 11 Goodwill Messages, for NASA's historic lunar landing in 1969.

Eric Williams married Guyanese Dr. Mayleen Mook Sang who was his daughter's dentist. Their marriage was greatly concealed from the eyes of the public and Sang gave birth to three of his children namely Alistair, Erica, and Pamela. Although their marriage was not known publicly, they remained together until his death.

Besides being famous for his political career, Eric Williams also authored his autobiography entitled Inward Hunger. The book details on how he experienced racism while living and pursuing his studies in England.

He also authored Capitalism and Slavery which was released in 1944 which tackled the topic of the slave trade prominent at the time.

Eric Eustace Williams was born on September 25, 1911, at the Port of Spain, Trinidad and Tobago to parents Eliza Frances Boissiere and Thomas Henry Williams. His father worked as a civil servant whereas his mother's lineage was part of the mixed French Creole elite.

For his education, Williams attended the Tranquility Boys' Immediate Government School then enrolled later at Queen's Royal College where he was not only a bright student but also an excellent football player. While playing for the QRC, Williams suffered an injury that led to hearing problems that led to him wearing hearing aids for the rest of his life.

Despite the injury, Eric Williams continued to play and was offered a sports scholarship at  Oxford's St. Catherine's Society in 1932 and was later known as St. Catherine's College, Oxford.

At the University, he pursued a degree in history which he attained in 1935 while ranked first in his history class. He sought a doctorate in Oxford, and he studied under the tutelage of Vincent Harlow and achieved the degree in 1938.

Eric Williams made an entry to the world of politics when he was designated to a position in the Anglo-American Caribbean Commission in 1944 wherein four years later in 1948; he became Trinidad's Caribbean  Research Council's Deputy Chairman.

At the same time, he was also performing a series of lectures about history, philosophy, the history of slavery and the Caribbean, and democracy to the people which drew an appeal to the general public and led to the 1956 inauguration of the People's National Movement.

The First Prime Minister of Trinidad and Tobago

The highlight of his political career is when Eric Williams attained the highest seat as the Republic of Trinidad and Tobago's first prime minister in 1962 until his death on March 29, 1981.