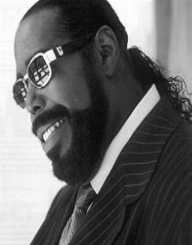 American soul singer, songwriter and music producer Barry White was born in Galveston, Texas on the 12 September 1944. Barry grew up in a musical atmosphere where Barry was taught to sing gospel music at young age.

White's brother Darryl killed in a clash with a rival gang. When Barry White was still a teenager, Barry White was imprisoned for a while for the theft of Cadillac tyres worth $30,000. After four months in prison,Barry White decided that his future lay with making music, rather than crime and gangs.

The family moved from Texas to Los Angeles when White was still young. Barry was eleven years old when he played the piano for the recording of Goodnight My Love by Jesse Belvin. Barry then joined a band, The Upfronts when he was 16.  After that Barry was played by Bob Keane on his labels Mustang, Bronco, and Del-Fi in an A&R position. Barry worked with the Versatiles who later called themselves the 5th Dimension. Barry also worked with Viola Wills on Lost Without the Love of My Guy which entered the R&B Top 20.

White began working with the female trio Love Unlimited, and Barry appeared on their single Walking in The Rain (With The One I Love). The single was a hit reaching number 16 on the U.S. pop charts as well as number 6 in the rhythm and blues charts. Barry was the producer and songwriter and also sang backup.
In 1973 Barry started recording as a solo artist and had some hits.

And in 1981 White recorded a duet album with his wife Glodean for CBS Records. The album included two hits Didn’t We Make it Happen Baby, and I Want You.  For the rest of the 1980s his output was low, then in the 1990s he again had hits.  In 1991 Barry recorded Put Me In Your Mix, and it reached number 2 on the R&B charts. The following year he did a duet with Lisa Stansfield on her All Around The World Tour which brought him back into focus with audiences in Britain.

Barry made a number celebrity appearances on television shows including The Simpsons. He also continued recording and touring. At the time of his death in 2003, he was preparing an album of duets. Barry was hoping to record You’re the First, the Last, My Everything with the Italian tenor Pavarotti. The two singers had previously performed the song together at a charity concert in Modena, Italy in 2001.

On the 12 September, 2013  Barry was awarded a star on the Hollywood Walk of Fame. He had six number one R&B singles and sold over a 100 million records.

Barry White married Glodean James in 1974. She was one of the Love Unlimited trio. They were estranged but still married at the time of his death. His partner at the time was Katherine Denton who had a daughter she claimed was his child. Paternity tests later proved that this was not the case.

His autobiography Love Unlimited was published in 2000.