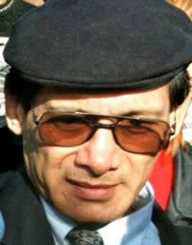 French serial killer Charles Sobhraj was born Hatchand Bhaonani Gurumukh Charles Sobhraj on the 6 April 1944 in Saigon, later, Ho Chi Minh City, Vietnam to Tran Loang Phun and Sobhraj Hatchard Bavani. His mother was Vietnamese, and his father was Indian born. He never knew his father and was adopted by his mother’s boyfriend, who was serving in the French army in Indochina.

Charles Sobhraj was sent to a French boarding school from which he tried to escape on more than one occasion.

Charles Sobhraj began anti-social and criminal behaviour as a teenager, and in 1963, he was jailed for burglary in France. He met a prison volunteer, Felix d’Escogne, who befriended and allowed him to live in his home upon his release from prison. Sobhraj had the opportunity to mix with Parisian society but continued with his life of crime through conning people and robbery. He met a French woman, Chantal Compagnon, and they fell in love, but before they could marry, he was imprisoned for eight months for driving a stolen car and attempting to avoid the police.

When he was released, he married Chantal Compagnon, and the couple fled France and relocated to Asia (1970). They travelled on false passports through Eastern Europe, befriending and robbing tourists. They eventually settled in Mumbai where their daughter was born. In Mumbai, Charles Sobhraj continued operating in the underworld as a smuggler and car theft operative. At this stage, he had also developed a gambling addiction.

After being arrested in 1973 for attempting to rob a jeweller, Sobhraj was arrested, and after his father paid his bail, he jumped bail and went to Kabul. Sobhraj and his wife once again began robbing tourists on what was known as the Hippie Trail. He was arrested once more, feigned illness and escape, returning to India. Compagnon then left Sobhraj, returning to France with their daughter.

Chantal Compagnon then travelled around Eastern Europe and the Middle East. After his brother Andre went to Turkey, they met up and began a life of crime as a duo. The brothers were arrested in Athens. Sobhraj managed to escape, but his brother was deported to Turkey where he was sentenced to 18 years in prison.

During the 1970s and 1980s, it is believed that Charles Sobhraj murdered between 12 and 24 people in South-East Asia. Most of his victims were young backpackers from western countries who were travelling on what was known as the Asian Hippie Trail. As he was fluent in a number of languages and because he had a charming manner about him, he was able to win the trust of his victims. He used to befriend tourists, then drug them; then steal their possessions and kill them.

His first known victim was an American tourist Teresa Knowlton who was found drowned in a tidal pool in Thailand. He linked up with Canadian Marie-Andree Leclerc, and she became his next partner companion and assistant. Sobhraj’s charismatic personality drew people to him, and he was able to manipulate them. He then met a young Indian man, Ajay Chowdbury who became his partner in crime. The pair’s first known murder was American Knowlton, and it was because she was wearing a floral bikini that Sobhraj became known as the Bikini serial killer.

The law caught up with Charles Sobhraj in Delhi where he was arrested for attempting to poison French students in 1976. Two of his followers, Mary Ellen Eather and Barbra Smith, were arrested for the same crime. The two women confessed, and Sobhraj was found guilty and jailed for seven years. At the time, he was also facing murder charges in Thailand and Nepal. After a failed jail escape, Sobhraj remained in prison in India until 1997.

Charles Sobhraj returned to France where he charged money for interviews. In 2003, he was in Katmandu, Nepal when a journalist recognised him and notified police. The Nepalese police subsequently arrested him for the 1975 murders of Connie Jo Bronzich and Laurent Carrier. When arrested, he denied ever having been to Nepal in the 1970s, but he was found guilty and given a life sentence in 2004.