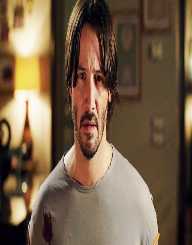 Keanu Reeves was born on the 2 September 1964 in Beirut, Lebanon to Patricia Taylor and Samuel Nowlin Reeves. Reeves mother, a costume designer, and performer was from the UK. His father an American geologist from Hawaii. Reeves has Chinese, English, Native Hawaiian and English ancestry.

The family moved to Sydney, Australia and in 1966 Kim, Reeves’s sister was born. The parents marriage broke up and Patricia Taylor took her two children to live in New York. She remarried sometimes, and Reeves stepfathers were film director Paul Aaron, rock promoter Robert Miller, and hair salon owner Jack Bond. Robert Miller and Patricia Taylor had a daughter together, Karina. The three children grew up in the Toronto suburb of Yorkville. Reeves schooling was unsettled. He had dyslexia and did better at sport than academics. He was a good ice hockey player, but injuries put paid to his hopes of becoming a professional.

Reeves theatre debut was as a nine year old in Damn Yankees. Later, age 15, he played Mercutio in Romeo & Juliet in a stage play.  He had a supporting role in the movie Youngblood (1986) which was filmed in Canada. This  hockey film starred Rob Lowe. Reeves headed to LA aged 20 and initially stayed with his ex stepfather, Paul Aaron, a television director. Reeves acted in a few television commercials and took what work came his way gaining attention when he appeared in River’s Edge (1986) an adolescent drama. Next, he had a supporting role in Dangerous Liaisons (1988). Diverse roles followed playing  from the role of Ted in the time-travel movie Bill & Ted’s Excellent Adventure (1989) to Parenthood (1989), and I Love You To Death (1990). He also appeared  in My Own Private Idaho (1991),  Dracula (1992) and Much Ado About Nothing (1991) and Speed (1994).

After Speed, Reeves’s career gained momentum, and he appeared in some films. His big break came when he appeared in The Matrix (1999). The Matrix grossed $171,479,930. After the success of The Matrix, Reeves continued appearing in smaller, independent films as well as more mainstream films. These films included The Replacements (2000), The Watcher (2000), The Gift (2000) Sweet November (2001), Hardball (2001) and then The Matrix Reloaded (2003) and The Matrix Revolutions (2003). Reeves also produced a documentary about modern filmmaking Side by Side (2012). In 2013, he starred in 47 Ronin, an adventure drama about a band of Samurai avenging the death of their master.  In 2013 Reeves starred in John Wick (2014)  an action revenge film and which drew praise from critics and delighted audiences. There was a sequel, John Wick: Chapter 2 (2017).

My Own Private Idaho (1991) with it Shakespearean undertones was an important milestone inKeanu Reeve,s career. He starred alongside River Phoenix in this film about two young men struggling with life. In Speed (1994) Reeves played the role of Jack Traven, an LA cop. This action thriller was a commercial and critical success. The Matrix Trilogy cemented Reeves’s role as a bankable Hollywood male lead.

An early award was the 1992 MTV Movie Award for The Most Desirable Male in Point Blank. In 2000 he won the Golden State Best Actor in a Leading Role for The Matrix (1999), followed by the 2000 MTV Movie Award for Best Fight for The Matrix. Reeve also won the World Stunt Awards: Taurus Honorary Award (2004) In 2005 was given his  Star on the Walk of Fame. Keanu Reeves shared the Teen Choice Award (2006)  with Sandra Bullock for The Lake House. Reeves won the Bambi Best International Actor (2008) for The Day the Earth Stood Still.

Reeves and his girlfriend Jennifer Syme had a stillborn daughter in 1999. The relationship broke down, but they remained friends until in 2001 Jennifer Syme was killed in a car accident. Amongst others, Reeves has been involved with both  Cameron Diaz Charlize Theron, but to date remains unmarried and has no children. He was a close friend of the late River Phoenix. Reeves sister Kim was diagnosed with leukemia and this led to him donating to cancer research and facilities.

Reeves is sports oriented and follows ice hockey, American football, and soccer. He has a motorcycle collection and is a keen motorcyclist. He enjoys surfing and follows the sport.

Keanu Reeves is known to support Stand Up To Cancer, SickKids Foundation,  Wildlife WayStation, LIFEBeat, Make It Right, Entertainment Industry Foundation and some other charities.