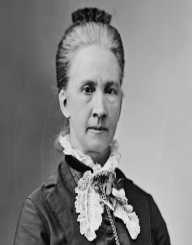 Belva Lockwood is an American educator who later turned and focused her attention on being a lawyer at the time when women were not allowed to practice law. She also served as a politician and authored several bills for Congress. She died at the age of 86 on May 17, 1917, in Washington, D.C., and is buried at the Congressional Cemetery.

Belva Lockwood married two men in her life. Her first marriage was in 1848 to Uriah McNall, a local farmer when she was 18 years old. They had a daughter named Lura, but their marriage was cut short when McNall died of tuberculosis five years after their marriage. She remarried 15 years later to Reverend Ezekiel Lockwood in 1868 who was much older than she was. He was a Baptist minister and an American Civil War veteran who turned to dentistry. Together, they had a daughter named Jessie, but she died shortly before her second birthday.

Born on October 24, 1830, in Royalton, New York as Belva Ann Bennett, she was the daughter of Hannah Green and Lewis Johnson Bennett, a local farmer. As a child, she was naturally curious and displayed a great passion for education. She started teaching at a local elementary school at the age of 14.

Belva Lockwood decided to further her education when she became a widow and had no way to finance herself and her child. This idea was much frowned upon by society since women at the time were a great deal less educated compared to men. She enrolled at Genesee Wesleyan Seminary in preparation for her college entry.

Early Career as an Educator

Before entering Genesee College, Belva Lockwood attended and graduated at Lockport Union School in 1857 with honors. In Lockport, she took a teaching post but soon left the job after discovering that she earned a lower wage in comparison to her male colleagues. Lockwood practiced teaching at a variety of schools while taking up law. She also served as the headmistress of Gainesville Female Seminary.

While attending Genesee College, Belva Lockwood took an interest in the field of law. At the time, a local law professor was teaching at the college and offered to conduct private classes which she undertook.

Her discovery of the fact that she earned a lower income compared to her male counterparts in Lockport urged her to push for the rights of women. Hence, Belva Lockwood and her daughter relocated to Washington, D.C., in the belief that she has a higher probability of attaining success for her equal rights advocacy.

Upon her relocation to D.C., they established a public institution for young ladies and at the same time contacted legislators and gave speeches regarding women’s rights. However, the issue of women earning far less than men continued to fall on deaf ears. Unfazed, she drafted a bill stating to equalize the wages of civil service employees. The bill came to pass and in turn, became law. Soon after, she started to pursue being a lawyer.

At the time, women were not allowed to study advanced learning, much less being a lawyer. Due to her gender, Belva Lockwood was denied entry from 2 law schools. She was finally admitted to the National University School of Law along with other women. She took classes under William Wedgewood who was the vice chancellor at said school.

She managed to complete all the required courses to graduate but was refused a diploma. Without it, she was unable to enter the District of Columbia Bar. Determined as she was, she wrote to then-US President Ulysses S. Grant where she stated her circumstance and appealed on his good graces. A week after sending the letter, Lockwood was granted her diploma at the age of 43 in September 1873.

Belva Lockwood pushed for the passing of this bill from 1874 until 1879 wherein it eventually passed into law and signed by then-US President Rutherford B. Hayes. As a result, she was sworn in on March 3, 1879, as the first woman to become a member of the US Supreme Court Bar.

Lockwood and the US Presidency Campaign

Belva Lockwood ran for the position of President in the 1884 US Elections under the candidacy of the National Equal Rights Party. Her running mate for her first run was Marietta Stow. She also ran a second time in the 1888 Elections but lost both campaigns.