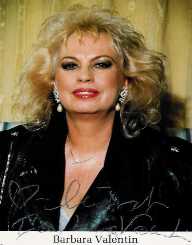 Barbara Valentin was born as Ursula Ledersteger on 15th December 1940, to Hans Ledersteger, and Irmgard Alberti. She was born in Vienna, Austria, and had a half-brother named Alfred. Valentin’s father was an Austrian art director, and her mother was an actress.

She also acted in movies that were made for television. These included, Welt am Draht (1973), and Martha (1974). Valentin also did a television miniseries in 1980, called, Berlin Alexanderplatz.

Out of the 21 productions she worked on, seven were directed by Rainer Werner Fassbinder, two by Ernst R. von Theumer, and two by the team of Walter Bockmayer and Rolf Buhrmann. During her career, Valentin was known as “the German Jayne Mansfield.”

Barbara Valentin married twice during her lifetime. Her first marriage was to Helmut Dietl in 1976. The couple divorced in 1983. She then married John Ashton in 1983, but they divorced in 1986.

During the 1980s, she was very close friends with the singer/musician, Freddie Mercury, even living with him for some time. After Mercury’s death, Valentin put her efforts into supporting organizations that fought against HIV, which is the disease Mercury died from.