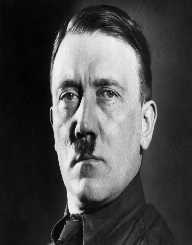 Adolf Hitler is known to the world as the Nazi dictator that led Germany into World War II. His acts and plans also led to the extermination of millions in the Holocaust.

While he thought of becoming a Catholic priest, Adolf Hitler was in his teens when he realized that his faith was not as important to him anymore. During his childhood, Adolf Hitler gains resentment for the Hapsburg monarchy that ruled Austria. Because they lived in the area that bordered Germany, there were many who were more sympathetic and loyal to Germany.

When Adolf Hitler was 16, he moved to Vienna, Austria to make his way as a painter. Not only did he face rejection after rejection, but he struggled to survive. In his economic suffering, his ire toward the monarchy grew.Adolf Hitler was also living in the capital city during a time that racial and religious prejudice was on the rise. At this vulnerable stage in his life, those negative feelings grew within him as well. He believed that the Jews were the cause of all of the problems in society and politics.

When World War I broke out, Adolf Hitler left Austria to enlist in the 16th Bavarian Infantry Regiment. In his service, he was awarded the Iron Cross for bravery. Despite his efforts, Germany lost the war.Adolf Hitler was in the hospital for injuries sustained during the war. Out of his anger and disappointment, he knew he had to make a stand to bring the country back to the greatness he saw in it.

In 1919, Adolf Hitler joined the German Workers' Party, which was later renamed the Nationalist Socialist German Workers' Party. Adolf Hitler became the Chairman in 1921. Hitler's talents in public speaking through years of leading school children and practicing sermons became more useful.Adolf Hitler gave them the Hindu symbol of prosperity with the swastika and organized the group in squads of storm-troopers (SA) and bodyguards (SS).

In 1924 Adolf Hitler was arrested in the party's attempt to overthrow the Munich government. Even though he was sentenced to five years, Adolf Hitler was released after nine months. During his imprisonment, Adolf Hitler wrote Mein Kampf in which he expressed his thoughts and beliefs for the future based on his personal experiences. While it did not sell well initially, it sold millions of copies after he became Chancellor of Germany. By the 1930 elections, the Nazi party led by Adolf Hitler was gaining national popularity. They had the support of industry, military, and even the media. The party won the majority vote.

As Chancellor of Germany, Adolf Hitler built an army despite the requirements of the Treaty of Versailles. Adolf Hitler supported the military in neighboring countries while taking over other nations such as Czechoslovakia, Poland, and France.

Even though he made a non-aggression pact with Russia to prevent a two-front war, Adolf Hitler broke that pact later in the war. The Third Reich was growing with the support of Italy in the Mediterranean. Great Britain was holding out despite attacks across the English Channel.

While the Jews were already being interred in camps in and around Germany, they were also being killed every day. The systematic killing of the Jewish population and others who did not fit in with the image of the perfect Aryan race terrorized the continent for the rest of the war. The same treatment was used on Soviet prisoners of war and anyone who resisted the Nazi party.

As the Americans entered the war and the British started to push back against the German assault, Adolf Hitler became more frustrated and anxious. When he would not listen to the advice of his generals, they planned an assassination attempt on Hitler. It failed, and Hitler had his enemies destroyed.

As the war fronts marched closer to home, Adolf Hitler's desperation reached its limit.Adolf Hitler committed suicide in his bunker. After that point, the Nazi party was no more because of its association with the diabolical treatment of humans.

Adolf Hitler dated Eva Braun for many years. They married in 1945. The couple committed suicide in Berlin the day after their marriage.

Adolf Hitler is known as the man who caused World War II. In his attempt to create an Aryan society, Adolf Hitler contributed to the destruction of a nation and the deaths of millions. People learn about the reign of Hitler so that it never happens again.

Adolf Hitler earned medals of honor for his service during World War I. In 1939; he was a nominee for the Nobel Peace Prize.