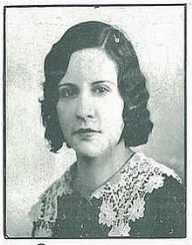 Billie Frechette was an American theater actress and singer who was put behind bars for the crime of hiding her criminal lover inside her apartment. She served 2 years in prison for her crime. She died at the age of 61 on January 13, 1969, on Shawano, Wisconsin after battling cancer.

Born on September 15, 1907, in Neopit, Wisconsin as Mary Evelyn "Billie" Frechette, her father was a French man who died when she was 8, while her mother came from the Native American lineage.

Frechette spent the early days of her life at the Menominee Reservation where she also attended the local school until she was 13 years old. She relocated to a government boarding school located in Flandreau, South Dakota that catered for Native Americans of which she attended for 3 years before relocating again. After South Dakota, she moved in with her aunt in Milwaukee where she found employment as a nurse. After a few years, she moved to be near her sister in Chicago when she was 18.

Growing up, Frechette struggled to make ends meet hence she worked multiple jobs at a time such as waitressing and housekeeping. At the age of 25, she tied the knot with Welton Walter Spark on August 2, 1932. But their marriage was short-lived due to the fact that Spark was sentenced to serve 15 years at Leavenworth on the charge of robbing drugstores' postal substations.

Shortly after she was separated from Spark to serve his term, she met John Dillinger in a dance hall one fateful night in October 1933. The two immediately hit it off despite Dillinger regardless of his criminal ventures. In fact, Frechette was so taken with Dillinger that she assumed a marital role for him and only once aided in his criminal activities; when she drove him to the hospital due to a leg injury from a skirmish with the police. She paid dearly for this action which resulted in her being arrested on April 9, 1934, on the charge of harboring a criminal in her Minnesota apartment. Dillinger watched from a few blocks away as authorities took her away and even attempted a rescue mission but dismissed the idea after much evaluation.

She served her term behind bars in Milan, Michigan at the Federal Correctional Farm for 2 years before being released in 1936.

Upon release, she chose to tour the country alongside members of Dillinger's family performing theater. They performed a play called "Crime Doesn't Pay" of which their tour lasted for a period of 5 years before she received to her hometown of Menominee Reservation where she spent the rest of her days.