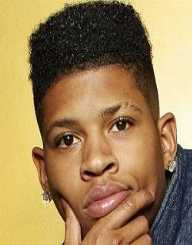 Bryshere Yazuan Gray is an American artist musically known as Yazz the Greatest.

Bryshere Yazuan Gray was born in Arkansas on 28 November 1993. He moved to Philadelphia with his mother after the parents divorced. Gray grew up with his sister Brianna in Philadelphia. His mother Andria Mayberry got Gray when she was still in her teen years. When the marriage broke up, she decided to raise her children as a single mother.

Bryshere Gray did his secondary education at Overbrook High School in Philadelphia. He was an energetic personality in school. His passion was American football until he suffered an injury that forced him out of the game.

Gray quickly discovered his other talent music. He used his talent to help generate more income for the family. Gray once worked at a local eatery selling pizza. When he got sacked, he turned his efforts to music. He used every opportunity to showcase his rapping prowess. Gray performed on the streets, parties and at any invitation he got.

Bryshere Gray's talent was noticed, and he got a recording contract with the music label Raw Life. He released some singles in 2012 including the song Homework. Soon Gray was a regular performer in clubs.

His major performance was in 2013. He performed in the Made in America Festival, a brainchild of rapper Jay Z. His star started shinning since then. He has since appeared in many musical concerts. He was invited by The Roots to perform at their Picnic Festival. After that, he got some curtain-raising opportunities for celebrity artists like Fabulous and others.

Even though Gray was a shining upcoming talent on the musical scene, life was not smooth for him. His celebrity status was not funding his bank account as much as many thought it did. In 2014, he was scouted by Charlie Mark. Mark took him to film producer Lee Daniels.

Bryshere Gray had an opportunity to audition for an upcoming movie. He did well and was taken for the second trials. In the second audition in Los Angeles, Gray met Terence Howard and other film stars like Taraji Henson, Will Smith and another of his childhood celebrity Jamie Foxx. The experience made a lasting impression on him. Gary went to Los Angeles knowing that his audition was with director Danny Strong.

He was picked to cast in the film Empire. He played the part of Hakeem Lyon, the child of a wealthy musician. The film had its first series released in 2015. It was aired on fox broadcasting Company.

It became an instant hit on the screens. Fox Company decided to extend the project and ordered other casts to form a series of productions. The film empire did its fourth series in 2017. The role of Hakeem transformed the life and status of Bryshere Gray. During the creation of the pilot series of Empire, Gray recorded some songs to be used as soundtracks for the cast. He was invited to record other soundtracks for the subsequent season series.

The exposure he got in empire brought him other contacts. He sealed a contract with Columbia Records in 2015. In 2016, he appeared in the television production New Edition. This was about the life and journey of the American all boy group New Edition. Gary played the part of Michael Bivins. He has done other minor film recordings since then.

In his twin career of music and acting, Bryshere Gray has been a nominee for several wards. In 2015, he was a triple nominee in the Teen Choice Awards. In 2016 he was a double nominee in the NAACP Image Awards. NAACP is the African American organization which advocates for the recognition of the rights of the community in the US. In 2017 gray was nominated by the BET Awards. Though he has not won any, the nominations prove that Gray is a recognizable star in the film and music industry.

Bryshere Gray was raised by a single mother under challenging circumstances. Many young people in the neighborhoods would have chosen to venture on quick money-making ventures like selling drugs. Girls would have gone into prostitution.

Bryshere Gray chose the hard way to climb up the ladder to stardom. When his sports dream was cut short, another door opened. He took his new talent seriously. As they say, the rest is history. Gray is a force to reckon and a role model to the young in the US.