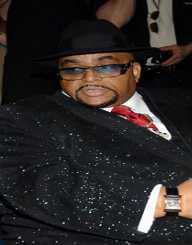 American soul singer and preacher Solomon Burke was born James Solomon McDonald on the 21 March 1940 in West Philadelphia. He had six siblings.

Solomon Burke began preaching at the age of 7 and was a pastor before he entered his teens. His oratory style and gospel singing earned him the nickname the Boy Wonder Preacher. Soon Burke was heard on radio shows broadcasting from Solomon Burke’s Temple via the Pennsylvanian radio station WDAS. During his high school years he formed the group, the Gospel Cavaliers and also did various jobs to help support his family.

After winning a talent contest held at the Cornerstone Baptist Church, the teenager was offered various recording deals. Solomon Burke found a manager, Kae Williams and signed up with Apollo Records in 1955.

Recording success did not happen overnight for Solomon Burke and he recorded a number of singles including Christmas Presents (1955), I’m in Love (1956), I’m All Alone (1957) and No Man Walks Alone (1957) without much success. After arguing with his manager, Kae Williams, Burke was let go by Apollo. Burke then trained as a mortician and worked with his uncle in his mortuary business for a while. Once his contract with Apollo had expired, Solomon Burke was signed up by Singular Records and recorded two singles Doodle Dee Doo and This Little Ring, again without much success.

Then in 1960, Burke was contracted to Atlantic Records. He had an immediate hit with Just Out of Reach (1961), and this was followed by Cry to Me (1962). Between 1961 and 1965 Burke had a stream of hits with Atlantic Records, recording thirty-two singles including If You Need Me, You’re Good For Me and Got to Get You Off My Mind. Cry To Me (1962) was recorded by the Rolling Stones as well as Wilson Pickett and in 1980 featured in the film Dirty Dancing.

Solomon Burke toured by bus across the United States and in 1964 was in Los Angeles visiting Sam Cooke on the day he was murdered. This tragic event inspired Burke to write what would become his biggest hit: Got to Get You Off My Mind. In 1968 he moved to Bell Records where he recorded a cover of the  Creedence Clearwater Revival hit Proud Mary (1969). As his recording power wanted during the 1970s,  Burke recorded the theme song for the sitcom Love Thy Neighbour and worked on an album with his children entitled the Sons and Daughters of Solomon.

Solomon Burke’s career revived in the 1980s when he recorded a live album Soul Alive! (1985).  His next recording,  A Change is Gonna Come (1986) resulted in critics calling it one of the best soul recordings of the 1980s. Based on this success, Burke continued touring and recording throughout the 1990s. In 2002 Solomon Burke released Don’t Give Up On Me on the Fat Possum label which featured songs from various artists including Bob Dylan, Van Morrison, and Brian Wilson. The album won a Grammy for best contemporary blues album. Burke recorded a country-soul album in 2004 with Buddy Miller, Dolly Parton, and Emmylou Harris.

In 2007 Solomon Burke hosted an all-star celebration honoring the founder of Atlantic Records, Ahmet Ertegun and the same year Burke performed at a private function after the Led Zeppelin reunion concert in London. Burke brought out the album Like a Fire (2008) which included songs by Ben Harper, Eric Clapton and Keb Mo and that year made his first appearance at the Glastonbury Festival in the UK. Burke was working on his final album; Nothing’s Impossible when he died.

From childhood, Solomon Burke had a weight problem, and at the time of his death, Solomon Burke weighed over 350 pounds/158 kg. Burke spent his final years in a wheelchair.

Solomon Burke married four times and had fourteen children. At the time of his death, he had ninety grandchildren. Some of his descendants are also involved in the music industry. Burke died on a plane at Schiphol Airport in Amsterdam, The Netherlands on the 10 October 2010.