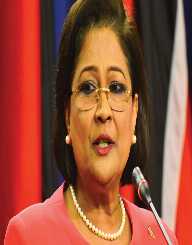 Prime Minister Of Trinidad And Tobago

Trinidad politician Kamla Persad-Bissessar was born in Penal, South Trinidad. Her parents were both of Indian ancestry originating in Bhelupur, Buxar in the Bihar region of India.

Kamla Persad-Bissessar has educated at the University of West Indies as well as Norwood Technical College in the UK and the Hugh Wooding Law School. She holds a BA Hons as well as a Diploma in Education, a BA of Laws, a Legal Education Certificate and an Executive Masters in Business Administration awarded by the Arthur Lok Jack Graduate School of Business in Trinidad.

Kamla Persad-Bissessar began her political career representing the constituency of Siparia as a member of parliament in 1995. She also served as Attorney General in 1995 and 2001. Persad-Bissessar became Minister of Education in 2000, and in 2006 she was appointed Leader of the Opposition. Then in 2010, she was elected leader of the United National Congress, defeating the party’s founder Basdeo Panday.

Kamla Persad-Bissessar is married to Gregory Bissessar, and the couple has one child.

Although baptized in the Baptist faith, Kamla Persad-Bissessar says that she also adheres to Hinduism.