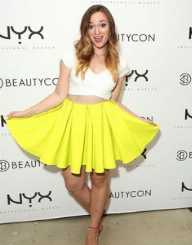 Some people accomplish their end goals at a very tender age. Lucky for them they become millionaires even before celebrating their 20th birthday. One such guru who tip-toed to fame at the age of ten is none other than Alisha Marie. She is now known as a Beauty Vlogger and YouTuber since 2013.She comes with a combined passion for editing and filming that gives her a chance to create appealing videos on YouTube. Currently, she is said to have over five million subscribers. Before fame, Alisha joined the online platform (YouTube) in 2008, but it took her three years to upload her first video. She is now trending for uploading back to school and beauty videos. She also likes to partner with other YouTubers, especially her favorite, Eva Gutowski.

Marie’s life is filled with humor and more humor. She comes with a bubbly thirst that is always ready to quench her fans to the core. She is super at everything she does. If she has over three million followers and you have 100, there is a big difference between you and her. Don’t judge me; I am trying to imply that she realized that girls love simple DIY projects. You know how to have flawless skin in minutes among others. In combination with her simple routines, she adds more charm and humor by entertaining her fans that’s why she is loved to the brim. Her subscribers are always eager to see what she posts next and not after a month but once a week. This shows that her credibility is up to the standard. Marie is one of the teens that will fit in people’s diaries for years to come. This is concerning the fashion tips that has given her a platform to boost her confidence. She also likes to give tons of tips when it comes to making girls room more attractive. In summary, Alisha radiates a bright personality that gives her a chance to surpass other vloggers.

On April 5, 1993, Alisha Marie was born in Riverside, California. His YouTube channel was called macbby11, but she later changed the name to Alisha Marie. Her YouTube fans will never cease to encourage her to reactivate her vlog account named as AlishaMarieVlogs. She had kept several of her videos in 2012 that was famously known as Breaking Dawn BLOOPERS. When it comes to her private life, Marie is quite good at playing hide and seeks games. Even the public eye doesn’t know about her mother or father, but they know about her everyday routine. She once mentioned her sister when she was asked to tag her along by her fans.

Alisha’s fame has taken her to the world of possibilities. She recently signed a contract with a talent firm called United Talent Agency. Not to mention she has also appeared in Girls Night In television series. As a famous Vlogger, she has also collaborated with Jon Pfeiffer and Evegail Andal. Allow me to say that Alisha is an artistic and multi-talented persona. This means that she will continue to discover more about her as she relentlessly fathoms beyond her expectations.