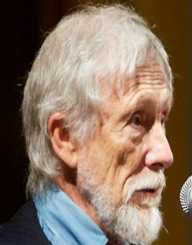 Gary Snyder is a poet, educator and an environmental activist. He was often referred to as' poet laureate.' He was born on 8th May 1930 in California. He wrote many essays and poetry books. Snyder was involved in The Beat Movement, he, alongside Allen Ginsberg read at the Six Gallery Reading event.

Gary Snyder was born to Harold and Lois Hennessy Snyder. His father had German, Irish, and English roots. His family moved to King County when he was two years.

At the age of seven, Snyder had an accident that changed his life. During the four months of his recuperation, he received many books from his folks wishing him quick recovery; he developed a reading culture.

His parents divorced in 1942, Snyder, his mother, and his younger sister moved to Portland, Oregon. His mother worked for The Oregonian as a reporter. During his childhood, Snyder worked as a copy boy for a newspaper.

Gary Snyder went to Lincoln High school where he worked as a camp counsellor. Later, he got a scholarship to Reed College in 1947. It was during this time when his first poem was published. He completed his course at Reed College in 1951, where he graduated with two degrees in literature and anthropology.

He took admission at Indiana University. After one semester he dropped out with the intention of becoming a poet. With an aim to study Asian languages and culture, he went to the University of California.

Gary Snyder moved to Japan in 1947, where he worked as a personal attendant and English tutor to Zen about Miura Isshu.

In 1958, Snyder went back to the U.S where he worked as a crewman. He later went back to Japan to become a foreign discipline of Moshi. During his time in Japan, Snyder loved travelling a lot. He once boarded an oil tanker to Istanbul. His most famous poetry work includes Riprap, Myths and Texts. He has used his work to explain his personal life.

He was a teacher at the University of California starting from 1986 to 2002. He taught creative writing.

Gary Snyder tied the knot with Alison Gass in 1950; the two, however, went separate ways in 1958. He went on to marry Joan Kyger who was also a poet. His longest marriage came when he married Misa Uehara, the marriage lasted 22 years. The two had two sons together. His last marriage was with Carole Lynn Koda.

Gary Snyder is an environmental enthusiast. Most of his writing mostly focused on the environment. Turtle Island, one of his poet collections scooped the Pulitzer Prize for poetry.

His collection No Nature was a finalist in the National Book Award. Snyder was awarded the Ruth Lily Poetry Prize in 2008.