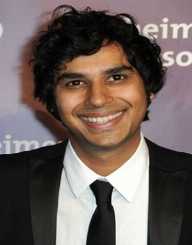 Born on April 30, 1981, Kunal Nayyar is Britain Indian actor and writer based in the United States of America. He made an acting debut in 2004 as a Pizzaman in S.C.I.E.N.C.E but came to prominence with his role in the CBS sitcom The Big Bang Theory as Rajesh Koothrappali in 2007 to present. He has also played roles in other productions like The Scribbler, 2014, Dr. Cabbie, 2014 and Trolls in 2016. His television roles include Ice Age: The Great Egg-Scapade, 2016, The Mindy Project, 2015 and Sullivan & Son from 2013 to 2014. He is the third World Highest Paid TV Actor earning US$20 million according to Forbes in 2015.

Kunal Nayyar was born on April 30, 1981, in Hounslow, London to a Punjabi family. He was sent to New Delhi where he was raised and had his early education. He was educated at the St. Columbia School in New Delhi. While there, he joined the school’s badminton team. After graduating from high school, Nayyar moved to the United States where he enrolled at the University of Portland, Oregon to pursue Bachelor of Science.

With his interest in acting, Nayyar took acting classes and appeared in several school plays. Though he studied finance, he decided to take to acting as a career after participating in the American College Theater Festival. To achieve this vision, he enrolled at the Temple University, Philadelphia, Pennsylvania and graduated with a Masters of Fine Arts in Acting.

Kunal Nayyar commenced his acting career immediately after his acting course. He appeared in American television ads and also in plays in London. His debut film was in S.C.I.E.N.C.E as a pizza man in 2004. In 2006 he played a role in Huck & Holden as Navin, an ambitious Indian student on an exchange program in America who sought to explore the American culture before going home. The same year, he wrote the play Cotton Candy in collaboration with Arun Das. The play was premiered in New Delhi and had positive reviews.

In 2007, Kunal Nayyar made a guest appearance as Youssef Zidan, an Iraqi terrorist in the CBS drama NCIS episode Suspicion. That year, he auditioned and had a role in the sitcom The Big Bang Theory as Rajesh Koothrappali an astrophysicist. He did the voicing of Gupta in Ice Age: Continental Drift in 2012 after he had previously co-hosted the Tribute to Nerds with Simon Helbergduring the comedy festival Just for Laughs in 2011. In 2012 he shot the film Dr. Cabbie in Toronto produced by Bollywood actor Salman Khan and released in 2014. He played in the off-Broadway production, The Spoils on June 29, 2015. Nayyar in 2016 voiced Guy Diamond in the animated movie Trolls.

Kunal Nayyar married Neha Kapur in December 2011. Neha is Miss India 2006. He published the book Yes, My Accent is Real based on his career. During the celebration of the UK-India Year of Culture in 2017, Nayyar formed part of the dignitaries invited from India and U.K to the Buckingham Palace for the reception. Nayyar who previously thought the invitation was just a prank from friends was astonished when it was later proved to be true. While there he got the opportunity to mingle with the royal family.

Kunal Nayyar won the Garland Award for Best Male Lead in a Play on the West Coast with the theatre play Huck and Holden in 2006.