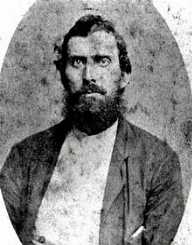 Newton Knight was the only farmer turned soldier who successfully staged a peasant revolution against the Confederation army during the American civil war.

Stuart Newton Knight was born in a rural farming family in Jones County in the state of Mississippi in the USA. Controversy surrounds his actual date of birth, but it is widely believed that he was born on November 10, 1829. He was home-schooled by his parents. Knight was the grandson of a famous slave owner, but never had slaves on his farm. His conservative Baptist beliefs never allowed it, and also because his own father hated slavery. He tended his expansive farm with the help of his family.

Unlike his famous grandfather, Knight lived his life out of the sweat of his farm. He had no businesses apart from the selling the farm produce. This was in contrast from his other extended family that enjoyed affluence in their lives.

In the year 1860, most northern states of the US had moved on from the dependency on slaves. They had industrialized and had their economy based on commercial activities. Their southern counterparts were agro-based. This meant they relied heavily on slave labor to actualize their potential. The divergent opinions on the matter led to a bitter contest in and out of the corridors of Congress.

When the southern states seceded, a civil war broke out. Now called the Confederation states, they waged a war of independence from the unionist north led by President Abraham Lincoln. Knight enlisted in the Confederate army. A few months into the war, Knight was granted leave to tend to his dying father. Upon returning home, he was dismayed by the horrible conditions he found. The Confederate army was at will ransacking the rural farms for food supplies, leaving the community at the danger of starvation. A law had also been passed in Mississippi that absolved farmers with more than twenty slaves from joining the army. Despite his return to the frontline, Knight deserted the army and went back to Jones County in 1861.

In what many saw as bizarre, Knight organized a ragtag militia to protect Jones County from the Confederate army. His small army consisted of runaway slaves, volunteer white farmers, and fellow deserters. His group became the Knight Company. In what shocked many, Knight mounted a counter-rebellion against a large and more experienced Confederate army. It even killed a senior commander of the army, Major Amos McLemore. Four years into the war in 1864, the Knight Company managed to drive out the army from Jones County. They declared it a Unionist free state. The Confederate army mounted a brutal campaign that killed many in Jones County. When the army left, the Knight Company regrouped and the rebellion continued. With no military ability to fight the unionist army, the confederation army surrendered in April 1865, ending America’s civil war.

After the war, the Republican Party that led the Unionist government won the elections in Mississippi. The slavery practiced had been abolished by the Emancipation Declaration by President Lincoln. Knight was given various public roles to help restore the black community and the farming fraternity. His efforts to forcefully free black slaves from their slave masters never bore many results.

When the Democrats and the separatist elements won the state elections in 1870, Knight retired from public service. He retired to his farm and continued with his private life out of the limelight.

Knight married his wife Serena Turner in 1858. The couple had nine children. Upon his retirement from public service in 1870, he married another wife Rachel. Rachel was a freed slave maid of Knight’s grandfather. With Rachel, Knight had five children. Most people were angered by his second marriage since Mississippi was still deeply racially separated by state law.

The mixed-race children were a subject of ridicule from the community. Encouraged by Knight, the children intermarried within the family. When the family started marrying each other, Serena separated from Knight. She continued living on the 165-acre farm until her death.

Knight died on his farm on February 16, 1922, at the age of 92. He was buried next to his beloved Rachel, breaking the segregation law once more. Even in death, blacks and whites were not supposed to be interred in the same cemetery.

Newton Knight is an enigma in the state of Mississippi. His courage to stand out against the Confederate army is still idolized until today. In equal measure, his marriage and creation of a local interracial family have been condemned to date.