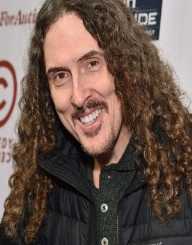 A legend of musical satires best-known for his popular and mine unique style of lampooning famous songs of no contemporary singers and musicians, American satirist, singer-songwriter, author and film/music producer Alfred Matthew Yankovic was born on October 23, 1959, in the Los Angeles suburb of Downey, California, United States of America.

He was the single child of his parents Nick Louis Yankovic and Mary Elizabeth. His father, a World War II veteran, was of Yugoslavian ancestry and was born in Kansas City, Kansas, United States. Nick came to California after the conclusion of the World War II and started living there. Alfred’s mother Mary hailed from an Italian and English descent who had come to California from Kentucky and got married to Nick Yankovic in 1949.

Raised in Lynwood, a city in Los Angeles County, California, Alfred Matthew Yankovic had his first accordion lesson the day before his sixth birthday when a traveling salesman in his effort to solicit his business offered Alfred’s parents an option between accordion or guitar lessons at a local music school.

According to his version, his parents chose the option of the accordion as they were enthralled by the accordion exploits of famous polka king Frankie Yankovic and wanted to see at least another Yankovic in the same field.

He graduated from the Lynwood High School as a valedictorian in 1975 and enrolled at the California Polytechnic State University in San Luis Obispo to study Architecture.

He was nicknamed “Weird Al” by his friends during the period of his study in Cal Poly after having participated in a radio show. Later, he decided to use the name as his professional identity. He completed his study at Cal Poly upon earning a bachelor’s degree in architecture.

During his sophomore year at Cal Poly, Alfred Matthew Yankovic received an opportunity to work as a disk jockey at the university’s radio station, KCPR. In 1978, he made his first recording called ‘Take Me Down’ and released the same in his original name of Alfred Yankovic.

The song lampooned the nearby well-known monuments like Bubblegum Alley and the fountain toilets at the Madonna Inn. In mid-1979, Yankovic recorded another single titled “My Bologna” mimicking the Grammy Award-winning song “My Sharona” recorded by the famous contemporary rock band “The Knack”.

He sent the song to Barry Hansen, who used to broadcast a radio show by the name of Dr. Demento. He, in turn, broadcasted the song and received a spectacular response from the listeners. Yankovic met the members of ‘The Knack’ after performing the song at one of his college shows and introduced himself as the creator of ‘My Bologna’.

Having developed a liking for the parody song, Doug Fieger, the lead singer of ‘The Knack’ recommended the song to the vice president of Capitol Records for its eventual release as a single. Yankovic received a stunning success after the release of ‘My Bologna’ and could realize his true potential to pursue a successful music career particularly in the field of comical, satirist music.

His 1980 parody song "Another One Rides the Bus," an imitation of Queen’s smash hit "Another One Bites the Dust", was recorded on September 14, 1980, while appearing as a guest on the Dr. Demento Show.

The song went on to become a huge hit with drummer Jon "Bermuda" Schwartz, whom Yankovic met while practicing the song outside the sound booth, banging his hand on the accordion case of Yankovic to maintain a steady beat during the recording of the song.

The duo later became partners and played their respective roles into perfection during the performance of ‘Another One Rides the Bus’ while appearing for Yankovic’s first television appearance on ‘The Tomorrow Show’ on April 21, 1981. However, Yankovic failed to receive any benefit from the initial release of the song as his record label, T.K. records became insolvent.

While on tour for the first time as a representative of Dr. Demento’s stage show, Alfred Matthew Yankovic was goaded by Jay Levey, Manager of one such stage show at a nightclub of Phoenix, Arizona, to create a full band of his own. After the incident, Yankovic formed his band with Steve Jay as the bass player, Jim West as guitarist and John Schwartz as the drummer of the outfit.

In 1982, Alfred Matthew Yankovic recorded another parody song lampooning the original song of "I Love Rock 'n' Roll" recorded by ‘The Arrows’. The song was a hit and was featured among the Top 40 radio hits.

The success of the song led Alfred Matthew Yankovic to sign a contract with Scotty Brothers Records. His first self-titled album ‘Weird Al Yankovic’ was released in 1983 on Scotti Brothers. ‘Ricky,’ released as a single of this album parodying Toni Basil's "Mickey" received exposure on the still young music video channel of MTV and achieved resounding success.

The single entered the top 100 videos of MTV at that time facilitating Yankovic to leave his mailroom clerk job at the local offices of Westwood One and focus solely on his music career.

Alfred Matthew Yankovic’s breakthrough performance came in his sophomore effort when he released the first single “Eat It” of his second album "Weird Al" Yankovic in 3-D in 1984, which is a parody of legendary Michael Jackson’s song ‘Beat It’. The single became a smash hit and climbed the Billboard Hot 100 chart to be placed at no. 12 positions as on April 14, 1984.

Yankovic's magnificent music career comprises of twelve albums, a countless number of compilations, four Grammy Awards and another 11 nominations, four gold and six platinum records in the USA and an envious record of selling more than 12 million albums as of 2007.

Alfred Matthew Yankovic got hitched on February 10, 2001, when he tied the nuptial knot with Suzanne Krajewski. Their daughter Nina was born in 2003, one day after completion of their second marriage anniversary. The full family presently lives in Hollywood, California.

Alfred Matthew Yankovic has some nicknames to his credit including ‘The Weird One, ‘The Boneless Boy,’ and ‘The King of Parody’