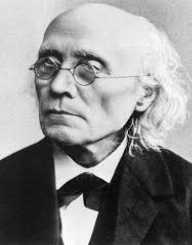 German physicist and philosopher Gustav Fechner was born on the 19 April 1801 at Gross-Sarchen where his father was a church minister.

Gustav Theodor Fechner received his education at Sorau in Poland and then studied medicine in Dresden (1917), before obtaining a degree in medicine in 1822, from the University of Leipzig. In 1835, he was awarded a Ph.D. As a student, he was influenced by E. H. Weber on physiology and Lorenz Oken on natural philosophy

After a successful academic career at the University of Leipzig, Gustav Fechner resigned due to health issues. He then began his studies into the connection between the mind and body. He lectured on the subject and also wrote several books and papers which contributed towards the understanding of psychophysics.

He published a large number of books and papers on chemistry and physics.

Gustav Fechner died at Leipzig, Germany on the 8th of November 1887.