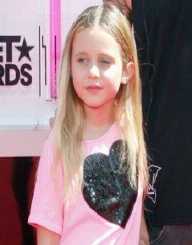 Alabama Barker was born on December 24, 2005, in California, USA. Her parents are Shanna Moakler and Travis Barker. She also has an older brother named Landon Barker and a half-sister named Atiana De La Hoya. Sadly, her parents divorced in 2008. Alabama says that they both still play an active role in her life, though.

Alabama Barker quite literally became a star as soon as she was born. Her family was on a show called Meet the Barkers, which originally aired on MTV,  near the time of her birth. On the show, the cameras focused on the interesting life of the Blink-182 singer and his family. Alabama Barker was born during the last episode of the last season of the show (right in time for the Christmas special), but that didn’t make her any less popular than the other cast members. After all, who doesn’t love a cute baby?

Alabama Barker is famous on the website/app called Instagram. On this site/app, people can post pictures and videos of themselves. Alabama’s name on the site is alabamaluellabarker. She has a large number of fans on the site, but she also has more than her fair share of haters as well. One rude YouTube user posted a video showing pictures from Alabama’s Instagram page. In the video, the YouTuber mocker he appearance and even bashed her parents for letting her post so many pictures online and letting her dress differently from other kids and wear makeup. The person who posted the videos had millions of fans on YouTube.

Some of these fans were rude enough to go on Alabama’s Instagram page and leave hurtful comments on her pictures. For some time after this incident, Alabama Barker struggled to deal with cyberbullying. Later, the YouTube video mocking Alabama Barker was removed from YouTube. Now, Alabama Barker knows how to deal with the haters. She ignores them and deletes the mean things they type. She would rather focus on the nice things about her account, like the cute pictures and videos she posts.

Alabama Barker also has her own YouTube channel, simply called Alabama Barker. On this channel, Alabama posts covers of her singing songs, videos of she and her friends doing fun and funny activities together, and videos of her spending time with her parents. She also loves to participate in YouTube challenges. All in all, she has an average YouTube channel for a kid, but her charm and celebrity connections make it extraordinary!

When not counting her followers on Instagram and her other social media accounts, Alabama Barker likes to spend her time listening to music, singing and playing the piano. Some may say that music is one of Alabama’s favorite things in life. When Alabama Barker grows up, she hopes to be a musician like her dad or a model like her mom.

Alabama Barker has even helped her father with his music and has a music credit on one of their albums. She loves her dad and his music, but she also loves pop singers, like Beyonce.