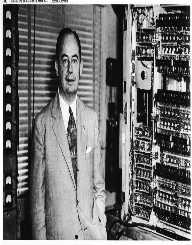 Mathematician, physicist, and polymath John von Neumann was born on the 28 December 1903 in Budapest, Hungary. He was born into a wealthy Jewish family and showed early signs of genius with a prodigious memory. His skill at mathematics taught at a very young age; he was familiar with calculus by the age of eight. When von Neumann was young, it was also apparent that he had a gift for languages, displaying an understanding of Ancient Greek.

He was the child of Miksa Neumann and Margit Kann and was one of three boys; he was brothers Michael and Nicholas. The family’s ancestors had arrived in Hungary from Russia.

His parents and tutors homeschooled von Neumann until his early teens; then he attended a Gymnasium for his next schools years. When Von Neumann was 22, he was awarded a Ph.D. in mathematics (1926) from Pázmány Peter University, in Budapest, Hungary. He was also enrolled at the ETH in Zurich and obtained a Diploma in chemical engineering (1925).

Von Neumann taught at the University of Berlin between 1926 and 1930 as a privatdozent, at the same time, publishing some critical papers. By his mid-twenties, the academic community in Europe was taking note, and von Neumann was considered a young genius. As a lecturer in mathematics, his pupils used to complain that Von Neumann taught and worked too quickly for them to take notes and comprehend. On the other hand, when preparing physics, he had a gift for presenting elaborate theories and ideas in a concise, easily understandable manner.

In 1930 Von Neumann moved to the United States. He joined the faculty of the Institute for Advanced Study at Princeton University as a mathematics professor. Other mathematics professors at the same time were: J.W. Alexander, Albert Einstein, M. Morse and H Weyl. Von Neumann returned to Europe annually and was still employed by the university. Then in 1935, when it was apparent that Nazism was on the rise, he resigned, and by 1937, he had become a naturalized American citizen.

Von Neumann wanted to sign-up and fight in the US Army but was considered too old. Instead, he was employed on special scientific projects. One of these projects was the Manhattan Project. Von Neumann joined the project 1943 and was tasked with working on the calculations needed to build the atomic bomb. Some of this was undertaken in Los Alamos, New Mexico. His main contribution to the project was the concept and design of the explosive lenses used in the implosion bombs.

In 1945 he was appointed to the Target Selection Committee. Part of his work was in assisting with decisions regarding which Japanese cities to target, the expected size of the blasts, how and where the bomb should be detonated and the estimated death toll. Von Neumann later worked with Klaus Fuchs and Edward Teller on problems relating to the development of the hydrogen bomb.

Von Neumann is regarded as a pivotal figure in the history of computer science. One of his breakthroughs was the use of memory in digital computers to store data as well as sequences of instructions.

Von Neumann was on the team which developed the ENIAC (the Electronic Numerical Integrator and Computer). This was the first electronic general-purpose computer. It was used to do a study on the hydrogen bomb and was also used to do the world’s first numerical weather forecast. He followed this up with the EDVAC (Electronic Discrete Variable Automatic Computer). Unlike ENIAC which was decimal, this was binary and a stored program computer. His paper The First Draft of a Report on the EDVAC deals with the computer architecture in which date and the programs are both stored in the same address space in the computer’s memory.

Von Neumann’s work encompassed set theory which impacted on all branches of mathematics and had an influence on quantum theory, economics, defense planning and automata. Together with Claude Shannon and Alan Turing, he was one of the conceptual inventors of the stored programme the digital computer.

Von Neumann created the field of cellular automata without the aid of computers; he constructed the first self-replicating robots with graph paper and pencil. In his Theory of Self-Reproducing Automata, he described the idea of a universal constructor.

Computer scientist Donald Knuth has credited Von Neumann as the inventor of the merge sort algorithm.

Von Neumann’s The Computer and The Brain (1956) concerns the human brain and how it is possible to view it as a computing machine.

Although Emile Borel did work on game theory, most historians consider John von Neumann the founder as he published his first game theory paper in 1928.

In 1937, he became a US naturalized citizen

John von Neumann died in Washington DC on the 8 February 1957.