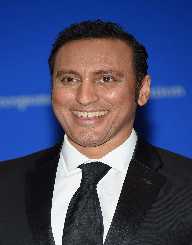 Aasif Hakim Mandviwala known in professional life as Aasif Mandvi is a British-American actor and comedian. Born on March 5, 1966, he started his career as a contributing correspondent on The Daily Show in 2006 and was promoted to a regular correspondent in 2007. Mandvi played the lead role in the web series Halal in the Family, which he also co-wrote and produced. The series premiered on Funny or Die in 2015. He wrote, co-produced, and played a role in the HBO comedy series The Brink. He is the author of the book No Land's Man in which he stated that his father moved the family to the US because the country has brunch.

Aasif Hakim Mandviwala was born on March 5, 1966, in Mumbai (then Bombay), Maharashtra in India. He was born to Hakim and Fatima, into a Dawoodi Bohra Muslim family. At age, one, his family moved to England, settling in the Yorkshire city of Bradford. His mother worked as a nurse and his father ran a corner shop. He received education at the Woodhouse Grove School. At the age of 16, the family moved to Tampa, Florida in the United States. He enrolled at the University of South Florida, graduating with a degree in Theatre.

After his graduation, Mandvi worked as a performer at Disney-MGM Studios at Walt Disney World Resort. After some few years, he moved to New York, to pursue an acting career. While there, he had some minor roles in off-Broadway productions. He also joined the band Cowboys and Indian. Mandvi wrote the one-man play, Sakina’s Restaurant, which won him an Obie award in 1999. This gained him some credentials as a good writer and performers. In 2002, he appeared on the Broadway production of Oklahoma, directed by Trevor Nunn. He had a role in the play Homebody/ Kabul by Tony Kushner and in the off-Broadway play Einstein’s Gift as Fritz Haber.

He continued to have many other roles in Broadway and off-Broadway productions including in On the Razzle as Melchior at the Williamstown Theatre Festival and in the docudrama Guantanamo: Honour Bound to Defend Freedom at the Culture Project. He played the lead role in Disgrace at Lincoln Centre’s Claire Tow Theatre in 2012, earning a Lucile Lortel Award nomination for his role.

Mandvi made a television debut in the series Miami Vice episode Line of Fire as a doorman at the Miami Biltmore Hotel. He has since featured in several TV shows including, Sex and the City, The Bedford Dairies, The Sopranos, Sleeper Cell and Law & Order. He had a recurring role on Fox romantic comedy US & Them in 2013. He was the write and co-producer and played the lead role of Rafiq Massoud in the HBO comedy show The Brink in 2015. He was a guest-star as Montgomery in the first season of the Netflix series, A Series of Unfortunate Events, in 2017.

Mandvi was hired on Comedy Central’s The Daily Show as a contributing correspondent, the same day he auditioned for the show in summer2006. He made a debut that same night. With his performance, he became a regular correspondent in 2007. He appeared mostly on the show with titles like "Senior Muslim Correspondent," Senior Asian Correspondent," "Senior Foreign Looking Correspondent," among others during which he satirizes and comments on issues pertaining to Islam, Middle-Eastern, and South-Asian. Mandvi’s interview with Don Yelton on a segment on The Daily Show in October 2013 resulted in Yelton resigning from his post at the North Carolina Republican Party office.

Mandvi has appeared in several films playing minor roles in most of them. His has played roles in films like The Siege, Die Hard with a Vengeance and The Mystic Masseur. He played a supporting role in American Chai and the role of a doctor in Analyze This. Mandvi played the role in Spider-Man 2 as Mr. Aziz of "Joe's Pizza" and a dentist in the romantic comedy Ghost Town in 2008. His other film roles include Bob Spaulding in The Proposal, which he co-wrote with Jonathan Bines, starring Sandra Bullock. In 2013, he played the role of Mr. Chetty in the comedy The Internship, starring Owen Wilson, and Vince Vaughn.

Aasif Hakim Mandviwala married Shaifali Puri on August 26, 2017, after dating for three years. Puri is an author and humanitarian.