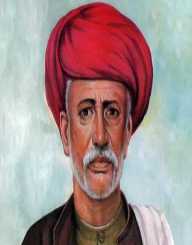 Jyotiba Phule was an Indian social reformer who is best known for his work in pioneering women’s education in India and undermining the caste system.

Jyotiba Phule was born in Satara, India on 11 April 1827. His family was part of the gardener caste and were largely illiterate.Phule’s mother, Chimana died before his first birthday, and a wet nurse raised him. His father, Govindrao, grew vegetables and flowers. Phule only attended school for a short time before he joined his father in working the fields. However, a Christian neighbor noticed the young the Phule had an aptitude for learning and convinced his father to send him to the local mission school.

Jyotiba Phule completed his education in 1847, and his life took a sharp turn the following year. He attended the wedding of a friend from a higher caste’s wedding and was insulted by his friend’s family. Phule also read The Rights of Man by Thomas Paine that year, and this convinced him of the need to dismantle the caste system. He also encountered Christian schools that educated women, and this convinced him that education was the best means of creating social change in India.

Jyotiba Phule opened his first school in 1848, and it was an all-girls school, and he was forced to leave his parental home because of this. He later opened a school for children of two of the untouchable caste groups the Mahar and Mang. By 1852, he had three schools running and was funded largely by European colonist’s donations. These donations stopped following the 1857 Mutiny in India. The Mutiny saw control of India pass from the East India Company to the British Crown after over a hundred thousand died in the rebellion. As well as opening schools Phule opened a home for low caste widows and infants. There was a large number of widows due to the prevalence of child marriage and remarriage was frowned upon.

Jyotiba Phule allowed the lower castes to visit his home and use his well openly. Phule began a movement to end the caste system and the idolatry that was rife in Hinduism. The movement was called SatyashodhakSamaj, Seekers of the Truth. Phule often put his views across in poetry and was openly critical of the holy text the Vedas and the priestly caste in India.

As was a tradition in India, Jyotiba Phule was married young, he married his wife, Savitribai, when he was just thirteen, and she was only nine years old. Savitibai worked with him in his efforts to destigmatize the lower castes and worked as a teacher in the schools they opened. They did not have any children together, but they did adopt a son from their home for lower caste children. Jyotiba Phule made his income as a supplier of building materials and from the small farm he owned. In 1888, he was given the title Mahatma, great soul. He died on 28 November 1890.