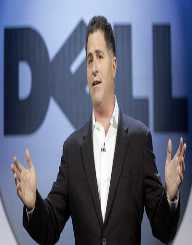 Michael Saul Dell was born on February 23, 1965, in Houston. His mother Lorraine Herod was a stockbroker, and his father Alexander was an orthodontist. Dell attended the Herod Elementary School. He was interested in the business world since a young age, and at the age of 8, he applied to take a high school equivalency exam. In his teenage years, Dell invested his earnings from several part-time jobs in stocks and precious metals.

When Dell was seven years old, he purchased his first calculator. In junior high, he encountered an early teletype terminal. During his teenage years, Dell was playing with computers at Radio Shack and got his first computer Apple II. He disabled the computer to see how it works. Dell attended the Memorial High School in Houston and sold the Houston Post subscriptions during summer, to earn money for his business ventures. This experience helped him to realize that people in the process of establishing a permanent geographic and social presence are most likely to buy a subscription. He hired some friends to go through court records and targeted this group of people, by collecting their names and mortgage applications. He used these leads to call people with the highest mortgages first, and in his first year, earned $18,000.

After graduating from high school, Dell went to study at the University of Texas and chose a pre-med program. Besides his studies, he started an informal business which put together and sold upgrade kits for personal computers. He applied for a vendor license to bid on contracts for the State of Texas. In 1984, Dell realized that the potential cost savings of a manufacturer selling PCs directly had enormous advantages over the indirect retail channel. He registered his company PC’s Limited which operated out of a condominium. His business sold around $80,000 in upgraded PCs, kits, and add-on components. He incorporated the company like Dell Computer Corporation in May 1984 and relocated the business to North Austin. The capitalization of the venture cost was $1000.

In 1992, Dell became the youngest CEO of a company which was ranked on the Fortune magazine’s list of top 500 corporations. He was at the time 27 years old. In 1996, he started selling computers on the internet, and his company launched its first servers. Soon after, Dell Inc. reported about $1 million in sales per day. In 2001, Dell Inc. passed Compaq and became the world’s largest PC maker, with 12.8% world market share. In 1998, Dell founded MSD Capital L.P. to manage his investments. The firm employs 80 people and invests in publicly traded securities, private equity activities and real estate. In 2004, Dell stepped down as the CEO of Dell Inc. but remained as the chairman of the board. However, he returned to the position of CEO in 2007 after the board’s request.

In 2013, with the help of Silver Lake Partners, Microsoft, and other landers, Dell took Dell, Inc. private. The deal was $25 billion worth and faced many difficulties during its execution. Dell holds 75% stake in the company. In 2015, Dell, Inc. announced its intent to acquire the software and storage company EMC Corporation. He was successful and acquired it for $67 billion, making the highest-valued tech acquisition in history.

In 2010, Dell Inc. paid $100 million penalties to settle SEC charges accounting fraud about undisclosed payments from Intel Corporation. Dell himself serves on the Foundation Board of the World Economic Forum and its executive committee of the International Business Council, the U.S. Business Council and the Indian School of Business. He has also served on the U.S. President’s Council of Advisors on Science and Technology.

Dell’s estimated net worth is $19.5 billion. In 1989, he married Susan Lieberman in Austin, Texas. The couple has four children. In 1999, they established the Michael and Susan Dell Foundation which focuses on grants, urban education childhood health and family economic stability. In 2006, the foundation provided %50 million in grants to several health-related organizations, associated with University of Texas. In 2013, the foundation provided extra $50 million to establish the Dell Medical School at the University of Texas.

Dell’s foundation has provided more than $1.23 billion to various causes in United States, India, and South Africa. In 2002, Dell received an honorary doctorate in Economic Science from University of Limerick. Dell received some criticism in the 2011 article of Mother Jones, for his spending on luxurious homes and private jet travel to pursue tax breaks and tax holidays. He was also accused of Dell Computer’s offshoring of jobs overseas after receiving the incentives for setting up locally.