Crystal Magic – Circle Of Protection For Home Or Property

Crystal Circle Of Protection For A Home

This article will cover the creation of a permanent protective circle for a home using crystal magic. The process involved is multilayered, and will include candle magic, crystal magic, and the basic elements of casting a magic circle. Involved will be at least five crystals, magically purified sand, blessed water, and at least six candles.


“At least” in this case means that you can enhance the ritual further with the inclusion of more crystals to enhance the protective properties of the circle, and each set of candles you choose to use will be burned down completely.

Materials Needed For The Crystal Circle

Placement Of The Crystal Circle Of Protection

Know that this process will be a bit involved time wise, you will want to time the final step of this magic ritual so that it takes place during the first nights of the full moon for the shortest version, or the night of the new moon for the month long version.

You will want to have four containers to hold the crystals, each with a layer of black sand on the bottom, and a layer of white sand on top of that. You will fill the jars with blessed water, and mark the glass with protective runes, such as the Algiz rune from the Elder Futhark, though feel free to use which ones appeal to you.

These four jars will be placed prepared the month before, during the three nights before the full moon to charge them with protective energies. The ritual to perform to prepare these can be found here. You will then find the four quarters of your property, the north, east, west, and southmost points of the ground you wish to be protected.

At a centralized location in your home, place a white or silver bowl filled with black sand, and a quartz crystal placed in it. This will serve as the center-point of your protective circle. It doesn’t actually have to be centered in the circle, though it won’t hurt to have it so if you can manage.

It is important that you place the stones correctly, the Aventurine jar will be placed in the north, the Amethyst jar to the east, the Amber jar to the south, and the Sodalite jar to the west. You will be burying them in the ground at the four points of your property, starting with the north, and then placing the appropriately colored candle above them. Be careful not to start a fire with this, watching the candles and placing them in a candleholder is highly suggested. 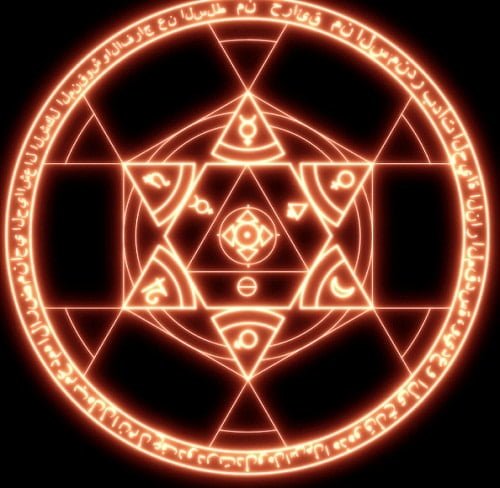 The first night of the ritual will require a full day to work. You will start by digging a hole, and burying the Aventurine jar in the north. This will be done at midnight, and you will cover over the hole and light the green candle.

You will walk the entire perimeter that you wish to be protected, with the green candle in hand, visualizing the green light of earth leaving a trail behind you marking out the border. You will then place it in its place above the buried crystal, and let it burn out.

The next part of the ritual will take place at sunrise, where you will bury the Amethyst jar in the east, light the yellow candle, and walk the perimeter again, just as you did before, only instead visualizing the yellow light of the energies of air laying behind you, mingling with the green of earth.

You will repeat this with the amber jar in the south and red candle at noon, visualizing the red energy of fire, and the sodalite jar to the west with the blue candle at sunset. In each case you will see the energies bonding with the energies laid before, and see them all strong and sustained.

The final part of the ritual will take place, once again, at midnight. You will take the white and black candles, and place them on either side of the center bowl with the quartz crystal. You will light them, each in turn, and walk the boundary again, visualizing the appropriately colored energy flowing out behind you.

You will take this bowl, and walk the border of the circle, taking small handfuls of sand and sprinkling them around the border. As you do so, see a sphere form around your protected area, doming both above you through the sky, and below you through the earth to form a sealed barrier.

Once this is complete, place the bowl back on the altar, and know that the circle is complete. At this time it would be appropriate to give a prayer of thanks to whatever entities you feel guard and watch over you, be they deity or spirit.