As in most cases with most animals, observing swans in their natural environment is the best way to get some symbolic clues from them. Typically in the water, the swan spirit animal shares a lot of symbolism with this element: intuition, fluidity, emotions, and creativity.

The swan as an animal totem is not limited to the water, though. It is quite multi-dimensional in its lifestyle. It lives on the Earth, cruises gently across the water, and soars the heights of the air, and it is quite comfortable and confident doing so.

Swans are also quite dreamy creatures and remind us to focus on the dreamier aspects of our own lives. In addition to these general attributes, the elegant swan also brings about ideas of love, romance, grace, beauty, and balance. As a messenger of love, the swan is often invoked in relationships.

They love relationships themselves. They are a courting species who pair for years, sometimes even a lifetime. When the swan spirit guide drifts into your life, it could be foretelling of a new relationship or reminding you not to take the one you have for granted.

When mature, swans have always been closely associated with beauty, elegance, and grace. They are closely associated with awkwardness, ugliness, and loneliness during their adolescent years. Because it is a water foul, the swan makes its life in and around bodies of water; it can easily take to the skies in flight. It also feels quite comfortable walking upon the Earth.

The Swan spirit animal symbolizes purity, love, balance and stability, transformation, dreams coming true, and happy unions. With this in mind, it is easy to see that the swan signifies a direction toward and a propensity for the more elusive and alluring facets of life.

Swans often choose life partners and will mate for life, and because of this, they are seen as bearers of love and union for human relationships. This concept is cemented throughout various religions and societies, and an almost universal depiction of swans seems to be synonymous with these traits.

Some myths indicate that when spirits desired to manifest a physical form, they would do so as a swan, often in pairs. This indication seems to solidify the ideology that swans signify union and partnerships. 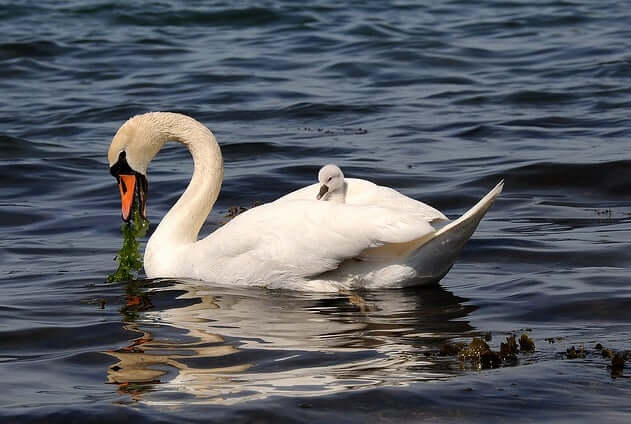 Partnership should then be considered one of the main symbolic meanings of the swan. Many cultures have recognized this throughout the ages.

Hindus, for example, referred to the swan’s graces as the Hamsa bird in the Saundarya Lahari text. In this story, two swans pair together and spend their lives swimming around in the depths of the divine mind, living on the knowledge exuding from the lovely lotus flower.

In the ancient Celtic traditions, swans were most discussed in the context of movement. They are transitory birds with specific migration patterns, like geese. As such, they spoke to the Celts of the changes that occur in one’s intuition: both in one’s mood and matters of the heart.

Although they are often tied to water and fluidity and, thus, female energies, the Celts also viewed them as solar animals, which are generally masculine. In this regard, they regarded the swan as a binary. On the one hand, the solar swan symbolizes the rising sun and a new day, while on the other, the moon says farewell to it.

Furthermore, the Celts linked swans to three of their deities, Belanus, Lugh, and Brigid. The latter symbolized grace and elegance, making the swan a fitting animal to be connected with her. She was not only beautiful but eloquent in her poetry and song.

Celtic mythology also states that spirits of the other worlds took the form of the swan when they needed to pass through the worlds. Additionally, these spirits were thought to make this journey in pairs, further reinforcing the themes of union and partnership.

The Celts also depicted swans symbolism in their artistry. Specifically, swans were shown in artworks with gold and silver chains around their necks. Gold represented the sun, while silver was representative of the moon. This was symbolic of the supernatural energies present on Earth.

When the cosmic forces align with the Earthly ones, all can be in proper balance. As the governor of balance, the Celts couldn’t help but feel that the swan had god-like properties to it.

When examining the symbolic meanings of the swan, one must take care to note the color differences, from youth until a fully-matured adult. The scale ranges from black to grey to white, but the two extremes have the most prominent color symbolism tied to them.

White swans are symbolic of the traditional view of swans and their attributes, such as purity. These swans prompt us to purify ourselves. Black swans, on the other hand, speak of different themes. They indicate the more mysterious aspects of our deeper selves – the parts of ourselves that yearn to express things creatively. Holding with the theme of balance, the swan reminds us to tend to both aspects of our being.

Other civilizations, such as the Celts, noted swans for their movement and migration patterns. As such, the Celts were led to associate the swan with the changing human disposition. The Celts and the Greeks also chose to liken swans to solar deities, such as Zeus, Jupiter, Belanus, Bridgid, and Lugh. Diurnal. The swan has come to symbolize the dawning of a new day, as well as the conclusion of an old day upon sunset.

In addition to its close ties and associations with deities, the swan’s elegance and grace have inspired many songs, paintings, and poems. In many paintings of swans, silver or gold coins are chained around their necks. This symbolizes a mystical manifestation of sacred vitality or the gods descending from the heavens and a balance between cosmic power, gold symbolizing the sun and silver symbolizing the moon.

The Swan Totem in Dreams

In dreams, the swan can symbolize transition and transformation. The color of the dream swan is quite significant, as a white swan signifies purity and cleanliness. A black swan might denote a voluminous enigma that dwells deep within the human subconscious. These meanings immediately bring to mind the tale of The Ugly Duckling by Hans Christian Anderson.

This is a story of the baby duck who was ostracized by its peers for its lack of beauty and elegance, only to be loved and nurtured by man and then returned to its lake to see that it had blossomed into a glorious and beautiful swan. This story serves as a human reminder of our inherent struggle to be accepted, considered attractive, and inevitably loved.

Dream swan spirit animal symbolizes a human need to extend our limbs and achieve new personal height. It encourages us to solidify the relationships that truly matter to us. As well as find the inner courage to create new and enduring partnerships with individuals who bring about a sense of admiration within us. The swan is a message to humankind that we must maintain hope and heart and a tenacious determination to seek out all we are entitled to consistently.