Knife symbolism implies that you can become a great person by taking control of your steps and making the right decisions now. Besides, you should be inspired by what you usually do in life. Perhaps, now is the time to live the life that you always aim for. Basically, avoid any fear in your life because it will bring sadness to your life. What you need to do is to become confident and inspire yourself to do better each day. Notably, you grow to become someone that no one expects. Now is your time to do everything that you like and to make your dream a reality. You have no excuses, but you are going to someone great in life.

More so, knife meaning indicates that you need to be sharp and smart in order to become someone better. On the other hand, you have to be happy with the position that you are in. Any pain should not upset you but make you stronger. More so, you should always be happy no matter what you are going through in life. Perhaps, you should know that you have no otherwise but to take control of your life because it is your concern. Equally, every chance you get in life will take you towards your passion.

Knife symbolism runs deep with historical significance. Many cultures have utilized symbolism throughout time and for varying reasons. There are many general themes that have been associated with them, as well. These include pain, betrayal, revenge, and sacrifice.

Obviously, these are not the most positive or uplifting of ideas. Although knives are certain utilities, they have also been used as weapons for thousands of years. When we examine the knife through the lens of a tool, it speaks to us of authority, freedom, skill, accomplishment, and resolve. Knives are also often donned as emblems of military service.

In the realm of love and relationships, knives aren’t a very bright and promising sign. Knives are sharp, conveying cold and painful messages. As stated above, knives often signify betrayal– something that you definitely don’t want in a relationship.

Another common belief concerned giving a knife as a gift. When this was done, it was believed that the relationship between the giver and the receiver would be severed. Thus, it was considered an insult, to say the least. Knives can symbolize cutting away a negative relationship, the loss of a love.

By cutting something bad out, though, you are simultaneously liberating yourself. The Buddhists followed this line of thinking, as well. Knives were considered indicative of the cutting off of materialism. 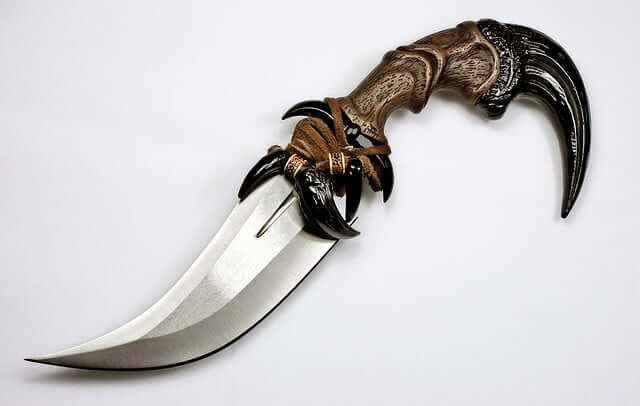 Sacrifice is another symbolic meaning that ties in with the knife. This association dates back to the most ancient of times. Knives were used in religious ceremonies for the purpose of animal sacrifice. They were also used as the primary weapon for many centuries.

First and foremost, though, the knife was an essential survival tool. Beyond this, people associated it with superstition. It played a major role in many rituals, especially ones connected with the different stages of life. For example, women would often place knives under the bed while giving birth because they thought that it would ease the pain. They would also plunge the knife into the headboard of a baby’s cradle in order to protect it.

The Greeks also recognized the protective qualities of the knife. Before going to sleep, they placed a black-handled knife underneath their pillow in order to keep nightmares at bay. In Anglo-Saxon culture, knives were particularly important in death. After a person died, they were buried with a knife so as to not be left defenseless in the afterlife.

The most personal meaning regarding knife symbolism focuses on the nature of our minds. This relationship is a messy duality. On the one hand, our minds can speak of clarity, good fine judgment, and great actions. The mind can be caring, logical, and rational. All of the goodness from within the depths of our hearts can be lived out because of our great minds.

However, the mind can play nasty tricks on us, as well. It can become our worst enemy, even stabbing its “owner” in the back. It can be cruel, tormenting us and allowing negative thoughts and images to pass through. We can only hope that this duality will not be balanced, that it will lean much more in the direction of the former.

Perhaps, knife symbolism indicates that you have to create a way that will take you through to the destination you want. In other words,  choose the right things that you will do in life and be willing to go through the path you want. Furthermore, you should not be afraid of any failure in your life and keep making wise decisions that will move you to another level.

Knives also have strong symbolism in dreams. For instance, a dream of a knife may symbolize a feeling that you have experienced an injustice. The dream is instructing you to resist such a wrong and fight back. This is perhaps the most literal of interpretations, as knives can be used as a weapon if someone is attacking you. However, it can also refer to an internal dispute that you may be having.

In this regard, your subconscious self may be telling you to strongly resist some inklings or dysfunctional thoughts you may be having. As is the case with all symbols, though, there are no right and wrong interpretations.

Everyone’s experiences are different and unique, meaning their ideas about objects’ symbolism will be, too. All we can say for sure about knives is that they have been important to us as a species for quite a long time and have made our lives infinitely easier with their utility.

Actually, the knife’s symbolic meaning implies that you need to stop wasting your time on the things that do not matter in your life. Let your actions take you to a better destination. Basically, within a particular time frame, then people will see your true colors. Set yourself in place and try to accomplish everything that you ever wanted. Remember that this is your time, and it is your greatest chance to make things happen.

Generally, the knife sign shows how life is going to become harder if you do not follow the right steps. In other words, you need to create something in your life that will bring the difference you want. Basically, you can create every opportunity that can make you become someone more. Besides, you are the master of your progress. So, you need to focus on things that excite you and make friends that will not take you for granted.

Knife meaning and symbolism imply that you are in the right place to set your own rules and become the person that you always admire. Perhaps, you need to sacrifice everything now and take this time to become someone better. More so, you should never doubt yourself but be grateful for your life and the position you are in. Equally, the time you have now will change to become your power.