Dog and Dragon compatibility explains the goodness of meeting your true love in the place where you expected to meet your lover. Besides, true love is someone who is categorized as a love diehard. In other words, your true love will be willing to risk their lives for the sake of making you happy. Probably, they avoid any disappointment at all costs because you are their lifetime dream. Specifically, you are the kind of person they have been dreaming of their entire life. Equally, concentrate on matters that will increase the love you have for each other.

Are Dog and Dragon compatible? Remember that the little things that you usually do for your partner will someday play a major role in your life. Therefore, you should consider impressing your partner with little gifts because to them it sounds like a great thing.  Also, it shows that you appreciate them in everything they do and for being in your life. More so, you should not disappoint each other but let your love overwhelm you always. Equally, these are the seasons where they find attractive to each other, especially when you are born within the month.

The Chinese zodiac compatibility between the Dog woman and Dragon man signs is going to be tough. They have problems understanding each other. Besides, you should be smart to cool your feelings down, especially when you are arguing. In other words, it is better to swallow your pride than to argue with things that don’t matter. Notably, it takes just a second to make things right if you are a smart person.

The Dog is very accommodating. They will typically get along with just about anyone. The Dragon will tend to be fiery and feel and display emotions as soon as they feel them.

The two Chinese zodiac signs of the Dog and Dragon have such different natures that they might just spend the whole time having one disagreement after another when they are in a relationship. 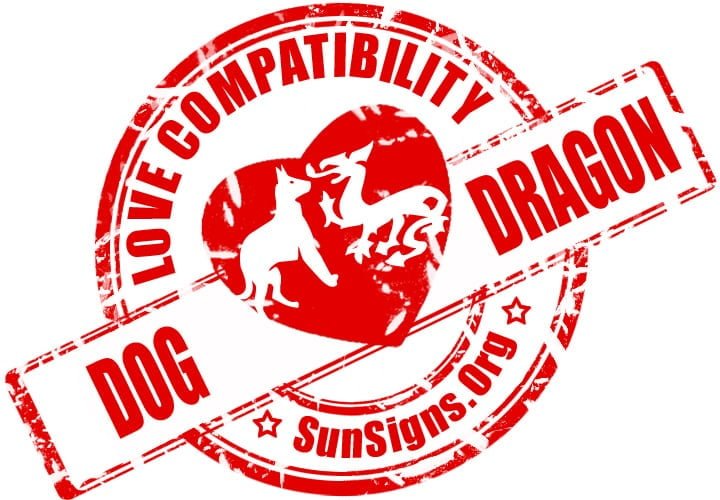 Both will have to work really hard to see where the other is coming from in a Dog and Dragon relationship. These Chinese astrology signs tend to be very opposite, which might mean these two will fight quite a bit with no love compatibility. Sometimes your opinions might be the opposite but consider taking all of them. Notably, you should not ignore any opinion from your partner because it can work well in your life.

The Dog man or Dragon woman can find their partner’s bluntness disconcerting. They are the kinds who speak freely, but they are more interested in trying to keep things peaceful. They are attuned to emotions being out of balance. Because of this, they will spend some time alone trying to keep their emotional state in check. On the other hand, you should consider spending time growing your business so that you will become financially stable.

The Dragon-man or woman could get tired of the Dog’s mood swings. They value their freedom. They might think the male or female Dog is trying to use their emotions to manipulate. This is not what the Dog is doing. Rather they will be somewhat temperamental and will have issues when it comes to trusting others easily. They will require devotion and understanding.

Dog in the Year of the Dragon

In bed, the Dog and the Dragon might share a passionate sexual connection. Besides this, though, they both might argue quite a bit. These two animal signs are not passive but rather tend to be straightforward in somewhat different ways. Romance will always bring the mood of intimacy.

Both these Chinese horoscope signs tend to be somewhat arrogant. Neither will want to bow to each other. These two might wish to understand better and maybe even pick up the attributes of the other one. They might not be able to figure out how to do this if this is what they want. 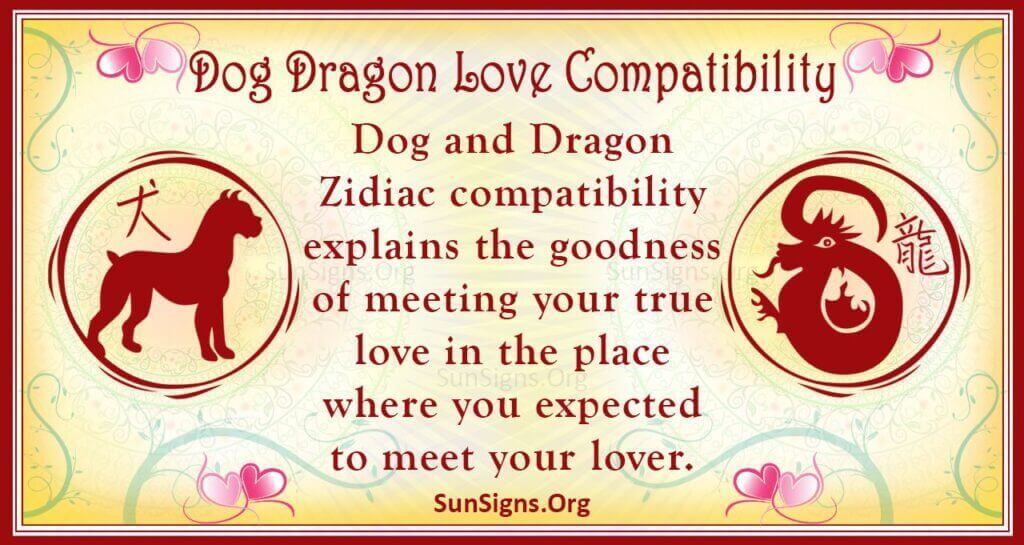 Dragon in the Year of the Dog

In a Dog-Dragon marriage, these two will have to do some work and make some allowances for each other in order to have a successful relationship. The Dog and Dragon in love could form the epitome of the love-hate relationship. Both have controlling aspects to their natures.

The Dog will be gracious and will try to lead by bringing others around them together. They will not appreciate their partner’s controlling techniques. They might even come to dislike the Dragon for employing them. The fiery Dragon will lead by being more domineering.

If these methods are used on the Dog, they will likely have their feelings hurt. They could then turn defensive and want to attack the male or female Dragon. The Dog and Dragon will find it incredibly difficult to compromise and, therefore, will find their relationship breaking up.

Dog and Dragon compatibility represents the experience that everyone has in terms of relationships. Sometimes people prefer being in a relationship with a mature person who has been in a relationship but broke up due to some reasons. Equally, learn to appreciate the person in your life and give her the treatment she wants because they deserve the best.