Dog and Sheep compatibility describes a connection in a relationship where both partners keep struggling to make things work. This relationship is the most influential because everyone wants to be the boss. Perhaps, what matters in a relationship is how decent you are. On the other hand, it is essential to have a relationship with your friend because they will always be there for you. More so, it would help if you had the sense that your relationship would work because you could count on yourself.

Are Dog and Sheep compatible? Ultimately, every relationship will have specific fears you should avoid. Besides, you should be strong and have confidence in everything you do. This will give you a clear sense that you will become someone meaningful, especially with your relationship. On the other hand, you should do things that will make you an expert in terms of relationships. Notably, the technology always is the greatest thing that affects relationships.

This Dog Sheep compatibility can work, but it will likely be very tricky to pull off. It is tricky. After all, there is a sort of competition in it because everyone wants to be at the front. No one wants to take the back seat. That act is not good in any relationship because it will, in the end, create problems that might lead to breakups.

The Chinese animal sign Dog is a skittish sign, prone to emotional instability. They hold everyone up to an exceptionally high standard of behavior. They suffer from an irrational fear that no one else can be trusted. In the face of adversity, or when finding its beliefs challenged, the Dog man or woman can quickly become stubborn and unthinkingly dogmatic. The code will be adhered to even when shown to be inappropriate.

Dogs do not tend toward idle banter; instead, focusing on topics and subjects they find meaningful. They can come across to others as exceedingly serious and waspish, as anyone who disagrees with them will likely hear about it.

The Chinese zodiac sign Sheep is artistic, esoteric, and eclectic. Trying to follow the logic of a Sheep or Goat for anyone other than people of the same sign can be pretty frustrating. They do not so much think in straight lines as they do in intuitive leaps and sidesteps. The Ram man and woman enjoy time with and around others but find the inside of their head so fascinating that they’ll tend to get lost. 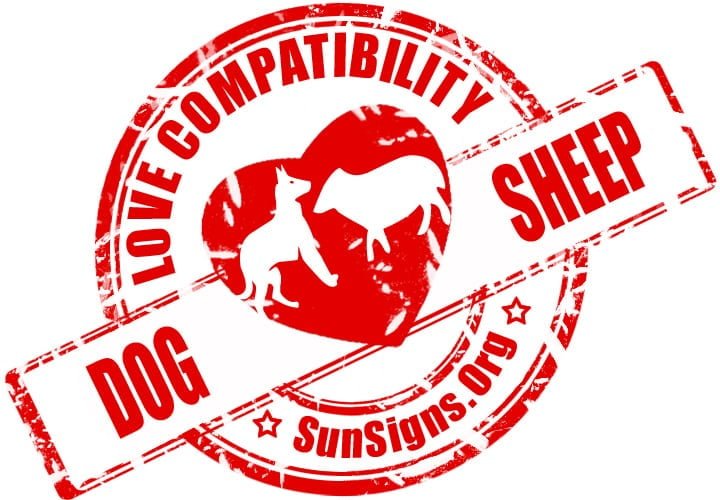 The Dog and Sheep business relationship can be blissful if both of them make a little bit of effort. The Sheep represents the epitome of an intellectual. They are delighted, chasing a thought through to its conclusion, then finding another one to chase down.

As Chinese zodiac compatibility predicts, the Chinese Dog is the opposite stereotype of the Goat. They would much rather get up and do something than sit around and think about it. No problem can’t be solved by doing something about it. They are so energetic that not being physically active is irritating and stressful. The negative outcome is that they become impatient with the sedentary Sheep.

When the Dog woman and sheep man are dating, they might initially have a tough time understanding each other’s nature. But over time, their love compatibility can improve with some understanding. Even in bed, the dog and goat sexually might not satisfy each other unless they give each additional time.

The Goat, in turn, becomes intolerant of the Dogs’ instability. On the other hand, these differences in a Dog and Sheep marriage can be productive. The Dog can accomplish and acquire things while the Sheep spend crucial, peaceful alone time performing whatever art or craft is their heart’s desire. The Dog, male or female, may build a garden, but the Goat will make it beautiful.

Dog in Love with the Year of the Sheep

The Chinese astrology sign Sheep woman may come across the Dog man as needy and lazy, but this is far from the reality. The Sheep knows precisely what it wants from a lover and companion and is more than willing to tell them so; persistently, at times.

The Goat, male or female, is more than willing to lavish the same attention on another. But they need to tell the Sheep what it is that they want. Open lines of communication and respect for each other’s time will be crucial to maintaining Dog Sheep compatibility. 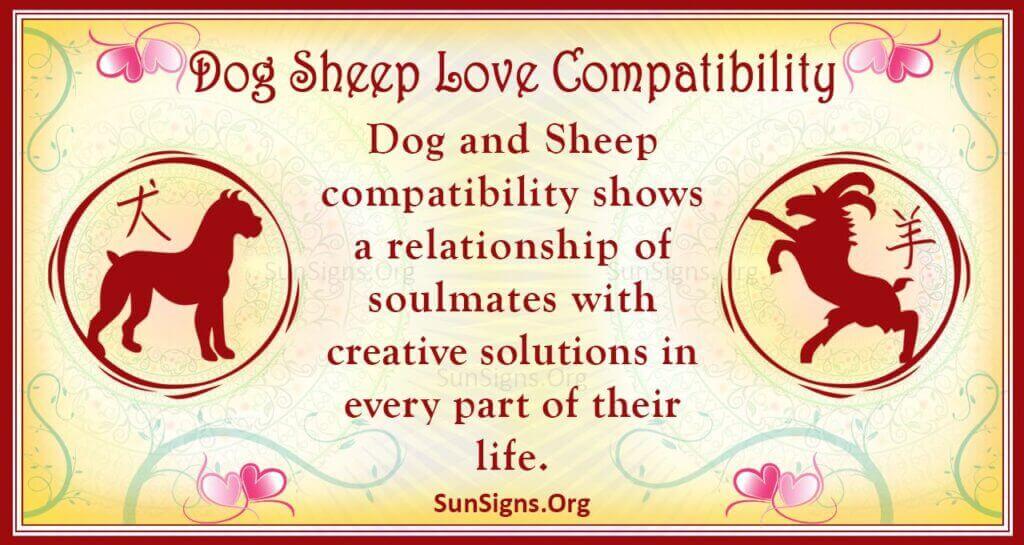 Sheep in Love with the Year of the Dog

In the business milieu, the Dog will likely be at the front and center of things. Their no-nonsense attitude will lead others to trust them readily. They will tend to be upfront about everything. If a dog does not like someone, it will say so. If they do not believe that they can deliver on a contract, they will say so.

This is usually seen as a refreshing breath of honesty and reliability in a world known for deception and lies. The Sheep does best behind the scenes. They are good at managing the utter chaos that is life. They use their lateral thinking skills to devise creative solutions to obstinate problems.

When in love, the dog and sheep soulmates can be each other’s best friends if they are a little more compromising.

Dog and Sheep compatibility shows a relationship of soulmates with creative solutions in every part of their life. Their relationship existed because of their smartness in dealing with misunderstandings. Besides, it is significant that you both deal with your problems properly. That shows that you are mature enough to handle big things in life in any given circumstances.