Are Dog and Monkey compatible? Specifically, they are connected as one because of their behavior. Perhaps, behavior takes a more significant role in every relationship, and it determines the longevity of every connection. Besides, a good-behaving couple will have a lasting relationship because they know what is good for them. Equally, you can measure every relationship through the quality of behavior each of them portrays.

The Dog and Monkey compatibility is fiery but can sustain if both are ready to understand each other. Sometimes it is hard for two people to understand one another, but the people from this particular season will have a special connection.

The Dog possesses a firm code of behavior against which it measures everyone. As long as the people around them conform to their ethics, everything will run smoothly. Then they will be a loyal and faithful companion. This Chinese astrology sign is not well known for idle chit-chat. Most conversations will be straightforward and to the point.

This firm code can cause the Dog man or woman to become stubborn, unbending, and reflexively dogmatic in situations where their views are challenged. They tend to suffer from an irrational fear that no one else is trustworthy because no one else can live up to their standards. 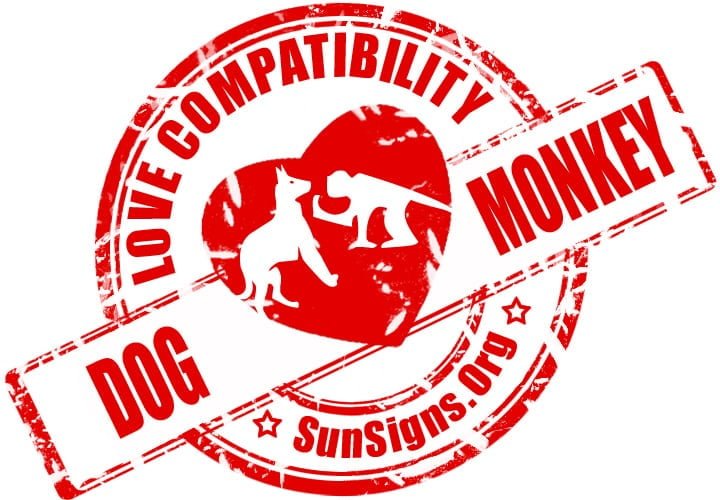 They also have a penchant for determining who is at a disadvantage in any situation and stepping up to champion any weak and oppressed parties… whether they want that help.

The Chinese zodiac sign Monkey is a high-energy social butterfly constantly in motion from one group of friends to another and from one adventure to the next. They tend toward showmanship and love to dazzle an audience. The downside to this is that the Monkey man or woman is willing to do just about anything for the sake of entertainment.

They have no idea what the word ‘moderation’ means, leading them repeatedly into trouble. Perhaps this is part of the reason they constantly move from one group to the next.

There is exceptional volatility in the Dog female and Monkey male relationship. The dog belief that others are incapable of being trusted and is more than likely to work overtime when in the vicinity of the social butterfly that is the Monkey. It is combined with their exceptionally high standards of behavior. Also, it will tend them to view the party animal Monkey as one of the lowest possible forms of life.

The Monkey will reciprocate, feeling that the dog is stubborn, stuffy, dogmatic, and, generally, a party-pooper. For those trying to make this work, all is not lost. The dog man and monkey woman’s love compatibility can work out with a little effort.

According to Chinese horoscope compatibility, the Dog and Monkey soulmates are incredibly high in energy and can learn much from one another. The male or female Dog must remember that it is not the moral pinnacle of the universe. The Monkey must know that it is not the center of creation. If the Dog learns to lighten up a bit and the male or female Monkey learns a bit of moderation, these two can get up to some quite famous adventures in personal and professional life.

Sex is not a good idea for Dog Monkey compatibility. The most likely scenario is that the Dog will become enamored of the Monkey. This is the first meeting, and he starts dating them. But if the Dog and Monkey get into bed, this will likely lead to an empty bed the following day and no return phone call. This is probably for the best, as they might not be sexually compatible and eventually break up.

If the Dog and Monkey in love hammer out their differences into a sort of working relationship, it is possible for sex to happen and not screw everything up. The real challenge lies in the Dog’s emotional volatility and the Monkey’s inability to take much of anything seriously to make this marriage work.

Despite the many issues in a Dog and Monkey friendship, a business partnership gives them a chance to show what they’re capable of truly. The Dog must be kept busy and will likely handle most of the actual labor in this pairing. 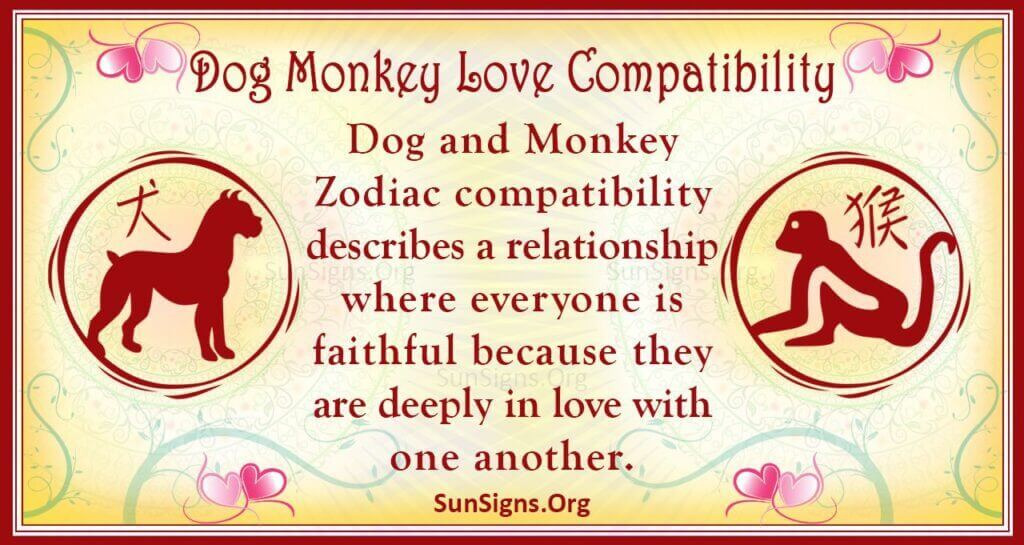 The Monkey naturally builds vast networks of contacts, and its restless nature can be harnessed when the need for travel arises. They will probably leave a few feathers ruffled occasionally, but this is not generally a significant problem. The Dog is a natural diplomat and should have little difficulty smoothing things over with offended parties. Notably, every connection according to every relationship is based on the understanding you both have.

Dog and Monkey compatibility represents another type of relationship where every partner is bound to be busy. They are alive because they are aiming for higher goals in life. Equally, try not to offend your partner in any case. Try to comfort your partner when they are facing rough times in any case. Besides, life is always sweet when you both understand each other.