Celtic five-fold is a symbol of change and self-improvement that you will soon experience, and that phase is the best in your entire life. In other words, you will meet new friends in your life that will support you to achieve your success. Therefore, it is your time to rejoice because all the pain is over. Basically, your hard work has paid off. Equally, it is a sign of congratulations for doing great. Continue with the same spirit, and you will end your journey well.

In explanation, Celtic five-fold gives you powerful insight into nature. Actually, it brings awareness to the things that can affect your life which is caused by nature. Perhaps, you should be fully aware of the changes happening in your life. On the other hand, you should keep changing as the world does. Don’t be left behind but adjust yourself to every change.

The Celtic Five-Fold symbol is another of the many important signs in the Celt people’s spirituality. It is shown as four circles in the shape of a cross, with a central circle inter-looping with the other four. Because of this aspect of the design, we can assume that the Five-Fold spoke of themes of integration and inter-connectedness.

Like the Arwen, this symbol is representative of the necessary balance found in nature. Many believe that the Celts used the Five-Fold to illustrate the four basic elements – fire element, water element, air element, and earth element – surrounding the central circle, which stands for the universe. However, the concept of the Five-Fold is not mutually exclusive to the Celtic culture.

In fact, almost every ancient culture created symbols to represent the connectedness between all of the elements in our world. Furthermore, the Celtic five-fold symbol can apply to other groups of four present in the universe, as well, such as the four directions (North, South, East, and West) and/or the four seasons (Spring, Summer, Autumn, and Winter). 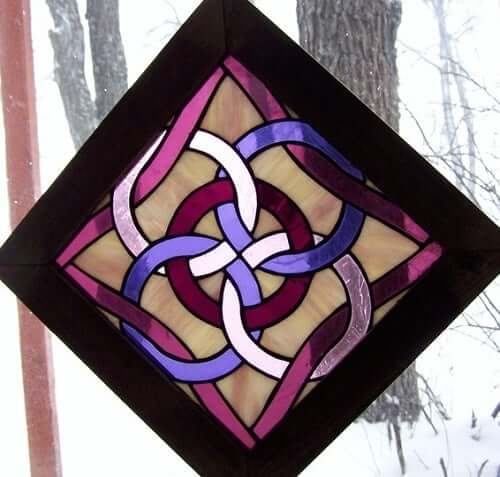 However, the Celts also saw various symbolic value in the central circle: the “fifth element,” also called ether. They were spiritually advanced compared to many other cultures of the time period and were considered the front-runners in esoteric thought. As such, the Celts did not limit themselves to merely observing the four physical elements surrounding their existence. Rather, they pushed down the rigid barriers of literal thought and had the ability to see beyond the seen.

While they recognized the prevalence and cruciality of the number four, they also saw the importance of the fifth element that joined them together. As a power of five, the Five-Fold symbol unifies the energies and creates a perfect balance in the universe. This can also be interpreted as a reminder of the importance of acting with balance in our personal lives.

The Druids, the ever-powerful spiritual leaders in Celtic faith, spoke of tapping into a deep-seated state by invoking this Celtic symbol, which allowed for equally deep illumination. As with all other spiritual exercises, invoking the Five-Fold efficiently and truly leads to enlightenment.

The Five-Fold symbolism can be approached from a multitude of directions. Appropriately, we can look at the literal directions that guide our lives first. Each of the Celtic circles in this symbol was assigned a number. The agriculturally-focused Celts gave the number one to the uppermost circle, with the numbers increasing to the East: the direction in which the sun rises. Surrounded by North, East, South, and West sits the center. This orientation also mimics the Celts’ (and our) perception of time, as well.

The middle circle acts as the pivoting point for hands on a clock or the central point of a sundial. When considering the seasons, which also move in a cyclical fashion, the fifth and central circle is indicative of the period of transition between each season.

From a more mystical and spiritual sense, the Celts also assigned a circle to the most prominent children of the mother goddess, Danu. Collectively known as the Tuatha de Danann, these children were believed to have magic, courage, and nobility running through their veins. From one to five, respectively, they are Nuada, Lugh, Dagda, and Fal, with the mother Danu acting as the binding center.

The major aspects that surround the Celtic five-fold are faith, prayer, sacrifice, hard work, and patience. Those are the main aspects that will make you successful in life. There is no better way you will take without focusing on those aspects. On the other hand, those aspects will give you the chance to improve your living situation. Equally, it is your time to work hard and make plans that will help you succeed.

Each of these beings was also thought to have provided the Celts with certain gifts, such as the sword, spear, cauldron, stone, and cord. There are other interpretations of the number five that have made themselves known throughout Celtic mythology, including the Cup of Truth and its various elixirs – think “Holy Grail.” As a well-rounded and creative people, the Celts surely had other symbolic meanings associated with the Celtic Five Fold symbol, even on individual levels.

In closing, the Five-Fold symbol of the Celts was first and foremost a general symbol of broadening one’s awareness of the forces acting around them. The interconnecting circles offer a plethora of deep meanings that are often overlooked due to their commonality. For us, the goal in spirituality should always be to see beyond the superficial in order to gain wisdom and live more meaningfully. When we invoke this multi-faceted sign, we can do just that.

Generally, Celtic five-fold symbolizes your seriousness and how you take your steps in life. In other words, you should not keep rotating in the same place in life but focus on improvement. More so, you need to put on record your plans. Perhaps, your goals will affect you in many areas. Basically, you will keep thinking of your goals each day. Do not be sad because you are almost overcoming every challenge in your life. Just keep working hard no matter how hard it is. Equally, you will soon be happy for no letting go of your goals.