If you look hard enough, you can find symbolism in every culture on the planet. However, it is much easier symbolism in some cultures than in others. One ancient culture that applied symbolic meanings to nearly every aspect of their lives was the Celts. The Celtic sign symbols have deeper meanings.

Celtic Symbols and Their Meanings

The word “celt” is a collective name that describes many tribes that had common religious beliefs, traditions, languages, and cultures. The Celtic culture can be traced to as far back as 1200 BC. The Romans thought that the Celtic culture was barbaric and referred to it as ‘Galli.’ No matter how strong the Celtic culture was in Ireland, people could incorporate it into Christianity. That is why we see many ancient Celtic symbols represented in Irish modern-day symbolism and culture.

Thousands of years ago, the Celtic ancient people brought Celtic sign symbols like the Celtic Cross and the Celtic Knot to Ireland. The symbols and signs had unbelievable significance in the lives of ancient Celts. The symbols have their place in legend and lore to the extent of architecture and symbolism.

Long ago, the Celts used to live in small rural settings while fully depending on weather patterns. They mostly practiced agriculture. The weather patterns would tell them whether they will have a bumper harvest or survive with little food. Their lives fully depended on the natural phenomenon. The forces of nature majorly controlled their intelligence in surviving. 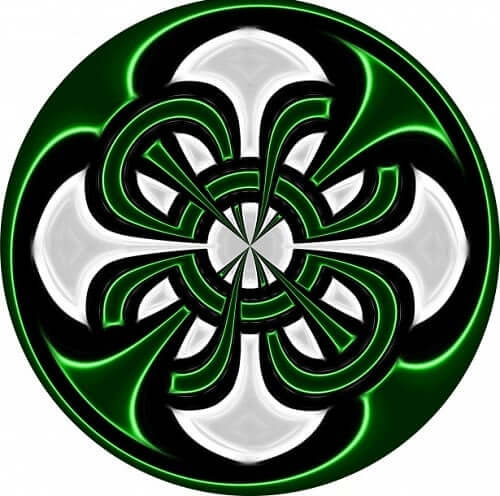 This symbol has three interlaced arcs. It means ‘three-cornered’ in the Latin language. The celts cherish it because it has been in existence for a long time. You can often see this symbol in the book of Kells. Architects have also used the triquetra to design ornaments. Triquetra’s symbolic meaning represents the neopagan goddess as a crone (showing wisdom), maiden (showing innocence), and mother (showing creation). At one point, people also used it to represent the Christian Trinity.

It is also known as Crann Bethadh. For those who study ancient Celtic mythology, history, and religion, this symbol was believed to have special powers. The Celts believed that was a sign of wisdom, long life, and strength. To this date, the Celtic Tree of Life’s symbolic meaning is harmony and balance. Celtic people got the meaning of rebirth from how trees changed in seasons; therefore, this symbol also represents rebirth.

The Celts believe that the Tree of Life is a sign of the connection between the lower and upper worlds. It shows that forces of nature have come together in harmony and balance. This strengthens the belief that there is a connection between heaven and earth symbolized by the Tree of Life. The celts further believe that trees were important to their ancestors. They would plant one big tree that they would sit under it while holding their special meetings. The big tree would also provide food and shelter for wild animals.

The Dara Knot is one of the most beautiful Celtic knots. Its name comes from the word ‘doire,’ meaning the oak tree. This knot first came out in the 3rd and 4th centuries. Knots like the Dara Knot were used in manuscripts, monuments, and temples from the 8th century. Ancient celts used to call upon this symbol whenever they needed strength and wisdom during tough times. The Dara knot symbol also referred to community, endurance, destiny, and connection.

Spirals are vital signs in many cultures around the world, including the Celts. They have signs that range from having one to three spirals, and maybe even more if you look hard enough. The number of spirals a sign has changed its symbolic meaning a little bit.

The double spiral contains all of the symbolism in the single spiral, and it has some more symbolism. The double spiral is said to be able to act as a balancing force. This makes the double spiral not only a symbol for balance but also equality. It is also said that the double spiral symbolizes opposites: the feminine and masculine, left and right, good and bad, and even things like the equinoxes that come with the changing of the seasons.

The triple spiral shares the symbolism of the single spiral, but not the double spiral. Three is an important number in symbolism worldwide, and the Celts are not exempt from this rule. “Three” represents the Father, Son, and Holy Ghost/Spirit in Judeo-Christian religions. Of course, the Celts were pagans for a long time, so their “three” were represented by the Mother, Maiden, and Crone. The triple spiral was full of feminine energy and power. It also symbolized transitions as well.

The three rays also play along well with the rule of significance in threes. This symbol represents balance more than anything else. The first ray symbolizes the male, the last ray for the female, and the middle ray is like a middle zone or balance of the two. This is also a symbol for male and female energies as well.

Lastly, the Triskelion is probably a symbol that you have never heard of. It is like a triple spiral, but instead of spirals, it has jagged lines as its three. It can roughly translate to “three-lagged” because some think it looks like three legs trying to run together. This symbol is said to represent challenges but also progress. Competition is also a big theme with the Triskelion.

This symbol is also widely seen in Celtic design and culture. Its name comes from the Greek word Triskeles, with tri meaning three and Skelos meaning leg. The name, therefore, means three legs. This symbol can be traced as far back as the Bronze and European Neolithic Age up to the Iron Age. The best place to see it is at the megalithic tomb of Newgrange on the entrance stones. Triskele’s meaning is associated with cultures like the Celtic God of the Sea. This symbol can also mean power, love, intellect, creation, destruction, preservation, The spiritual world, celestial world, present world, among others.

These are just a few of the popular Celtic signs that had symbolic meanings applied to them. There are many more Celtic symbols with meanings to decode. If you want to learn more about Celtic symbolism, other culture’s meanings for their symbols, or symbolism in general, then you can read more articles like this one here on SunSigns.Org!