Single digits as well as larger numbers have certain identifiable powers. These are expressed not only through the physical shape and design of the numbers written representation but also through their connection to the principles of the universe.

All of life is connected in one way or another, and numbers are not exclusive to this. They share relationships with all of the things in nature that humans do, making them extremely powerful symbols. There is so much more to the study of numbers than what instantly meets the eye.

Each number in a numerology calculator represents a plethora of mindsets, meaning that a single event or occurrence can be interpreted in a variety of ways. Think of number symbolism as more of a tool for cracking the code that is a difficult situation rather than simply acting as a concrete omen of something to come. The intricacies of this code are detailed, in a most general sense, below. Use the symbolism of numerology numbers to enhance your own personal clarity.

“One” in a numerology reading is symbolic of a strong leadership and independence. Traditionally, these were thought to be solely male characteristics, making “one” a masculine number. Being “number one” is synonymous to being the best, the strongest, the most powerful, so it should not be surprising that this number symbolizes confidence, as well. However, “one” goes beyond the basic power of humans to refer to the divine power, the Creator.

Fittingly, “two” is indicative of a partnership, whether in business or interpersonal relationships. As they say, “Good things come in pairs”. Two can thus be considered a fairly lucky number. It has balancing properties and reminds us of the importance of having such in our lives.

However, “two” also indicates the constant struggle between the conflict and the opposition, the balance between the positive and the negative. Thus it is not only a number of pairs and connection: it is also a number of division. Common partnerships/dualities include light and dark, good and evil, day and night, and life and death.

As stated elsewhere on this site, the number 3 is an extremely lucky number that is symbolic of abundance and good fortune. It has been used in practically all religions since the beginning of time to indicate a trifecta of sorts. For example, the number three shows the relationship between the past, present, and future, beginning, middle, and end, and/or birth, life, and death.

Because of this, it was considered the first “true number” by the Pythagoreans, who recognized the cruciality of the geometrical triangle. In a more spiritual sense, “three” was thought to symbolize traits along the lines of harmony, wisdom, and a deeper sense of understanding. 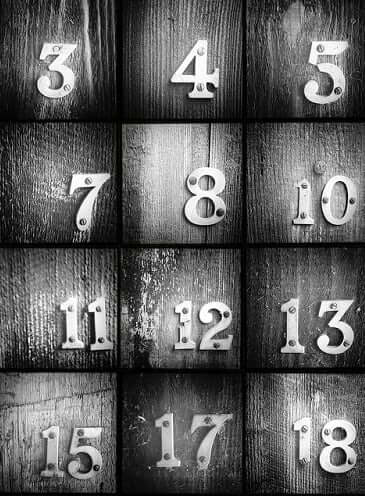 “Number Four” symbolism typically equates with a stability in one’s life, whether re-affirming a proper balance or drawing your attention to a change that needs to happen. As a symbol of stability, “four” represents a proper sense of order and the completion of justice. It is the true number of the Earth and mankind together.

Some, such as the Pythagoreans, viewed it as a one of the “perfect numbers” because of its relation to the occurrences of four in nature, as well as the division of the soul into mind, opinion, science, and common sense. We find the number “four” throughout nature: four seasons, four directions, four sides to the stable square, four elements, four winds, four phases of the moon, etc..

“Five meaning”, rather obviously, is thought to symbolize a marriage of sorts. This is because it is the sum of the female number “two” and the male number “three”. Additionally, this number can be interpreted as representing the marriage between the four limbs of the body and the head that controls them. As a masculine power, “five” indicates love, health, and strength.

As a number of beauty, “number six” symbolism is associated with feminine energy, love, passion, and sexuality. In images, it is frequently associated with Venus in all of her truthful and sincere glory. “Six” is also thought to convey a sense of completeness. The Pythagoreans and ancient Greeks alike recognized its value as one of the few “perfect numbers” long ago and incorporated it into many aspects of their daily lives.

Lucky “seven” is indicative of pure perfection. It is also symbolic of a secure sense of safety and rest. Fittingly, “seven” the important numbers of “three” (lucky, heavenly) and “four” (Earth, body) to form a power number or the “Septad”, to the Pythagoreans. Seven also occurs naturally, like the other numbers, in the form of the colors of the rainbow and number of days in a week.

In addition to “three”, “number eight” is also symbolic of an abundance, whether in money, harvest, or fertility, and a sense of harmony and balance that should accompany it. It also is thought to inspire people to make difficult decisions, as some type of power typically comes with abundance. Because of its strong associations with abundance and wealth, it is viewed as a strongly lucky and prosperous number in Chinese numerology.

“Nine” is believed to be the number of wisdom and magic, although many ancient people considered it to be unlucky, as it is one less than the perfect “ten”. However, some view it as the number of completion and fulfillment, as it is thought to symbolize the heavens and afterlife. Its connections to magic and higher levels of thinking have made it sacred to many groups of people, as well.

Although this article only details the single digits, they are a good jumping off point for interpreting larger numbers. By combining the basic meanings of single digits into super numbers, we are able to gain more from the “Karmic lesson“, so to speak.

You have a larger variety of number symbolism to interpret and take home. As with all symbols, there are no “rights” or “wrongs”. There are historical contexts and popular ideas only. Whatever a number speaks to you is for you and you only, so listen to it.